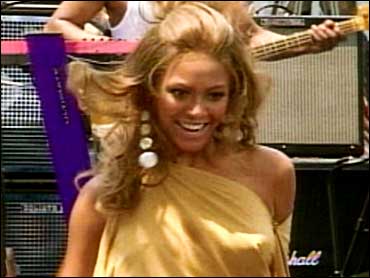 On Friday, Aug. 1, Shania Twain performed three songs from her latest album, "Up!" and her big hit "Still The One" from her last CD, "Come on Over." The concert was taped and it aired on Wednesday, Aug. 20 on The Early Show.

On July 24, the Grammy winning pop/rock band Hootie & The Blowfish took fans back to 1995 with their single, "I Only Wanna Be With You" and sang (from their new CD) their chart-topping single, "Space."

Successful duo Daryl Hall and John Oates performance was on-the-air on July 23. From their latest album, "Do It For Love," they sang "Man on a Mission." They also treated their fans with such hits as the 1977 "Rich Girl" and 1985 "You Make My Dreams."

"Do It For Love" is their first new set of studio material since 1997's "Marigold Sky."

On Wednesday, July 16, viewers got to enjoy the legendary R&B band Earth, Wind & Fire. They sang the hit single "All In the Way" from their new album, "The Promise." For the past 34 years, the Rock and Roll "Hall of Famers" have been grooving across the globe bringing their unique musical style to fans everywhere.

Also part of The Early Show Concert series was Beyonce Knowles. She sang the new hit single, "Crazy in Love."

Beyonce struck gold with her female super-group, "Destiny's Child" and now she's branching out on her own with a brand new solo album, entitled "Dangerously in Love."

On June 26, it was India.Arie's turn. She performed some of her biggest hits including, "Interested" from her latest Grammy Award-winning album, "Voyage to India."

Rob Hotchkiss, Pat Monahan, Scott Underwood, Jimmy Stafford and Charlie Colin of the band Train was the second band that performed for our Summer Concerts. They sang a few songs from their new album, "My Private Nation," as well as some of their hits.

The Early Show kicked off its series with singer/songwriter Jewel. She performed a few songs from her soon-to-be-released album, "0304," as well as some of her past hits.

Recently, Jewel was seen on VH1's "Divas Duets" live concert, part of the sixth annual "VH1 Divas" show. She joined fellow divas Mary J. Blige, Chaka Khan and Whitney Houston to raise funds for the VH1 Save The Music Foundation. The foundation is a non-profit organization dedicated to restoring instrumental music programs in America's public schools, and to raising awareness of the positive impact that music has on kids.

On Monday, June 9, The Early Show kicked off its VH1 Save The Music concerts as well. So watch the performances.