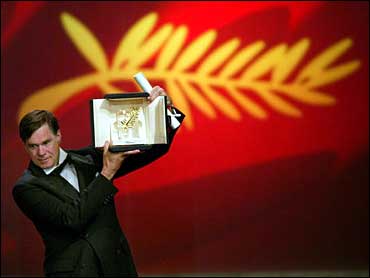 Gus Van Sant's film "Elephant," about a high school shooting in America, won the top prize at the Cannes Film Festival on Sunday.

The director cast real high school students, not professional actors, to star in the film, and asked them to improvise their lines. The movie starts out showing an ordinary day at school that turns to tragedy when two students go on a shooting spree in the hallways.

"Uzak," (Distant) a Turkish film about a jobless man from the countryside who irritates his sophisticated city cousin by moving into his apartment, won the Grand Prize, or second place.

The film's two stars, Muzaffer Ozdemir and Mehmet Emin Toprak, shared the award for best actor. They played the two cousins — both lonely and alienated, but unable to become friends.

Toprak died in a car crash shortly after learning that the film was selected to show in Cannes; Ozdemir is an architect by profession, not an actor.

The screenwriting prize went to Denys Arcand for "The Barbarian Invasions." He also directed the French-Canadian film about a man who confronts death with humor and sharp intelligence. The movie seemed to touch the most hearts in Cannes, and had many viewers wiping away tears.

Marie-Josee Croze, who plays a young drug addict recruited to supply the dying man with heroin to ease his pain, won the award for best actress.

The jury prize went to "At Five in the Afternoon," by 23-year-old Samira Makhmalbaf of Iran. The movie - her third shown in Cannes - is about a spirited young Afghan who dreams of being her country's first woman president.

"Reconstruction," by Denmark's Christoffer Boe, won the Camera d'Or, an award for the best film by a first-time director.

The prize for best short film went to Australia's Glendyn Ivin for "Cracker Bag," about a girl who saves her pocket change to buy firecrackers.