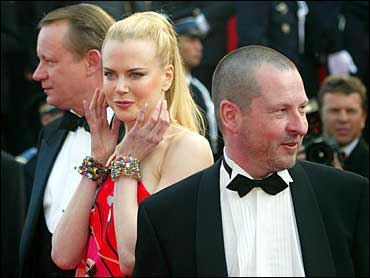 Danish director Lars von Trier has never been to the United States. Yet from his latest film fantasy of America, it would be fair to conclude he feels it's a country gone to the dogs.

"Dogville" can be viewed as an examination of the bestiality inherent in humanity at large. But with its make-believe Rocky Mountain setting, the film will be seen by many as a portrait of ugly Americans doing their worst.

Von Trier says "Dogville" is not a "uniquely American" story and could have taken place anywhere. But he adds that much of his inspiration came from his view of the United States from pervasive American TV programming he sees in Denmark.

At a news conference following a screening of "Dogville," von Trier did not detail what he sees as America's ills.

But in a written statement included with publicity materials, von Trier says: "If you are strong, you also have to be just and good, and that's not something you see in America at all. ... I don't think that Americans are more evil than others, but then again, I don't see them as less evil than the bandit states Mr. Bush has been talking so much about.

"I think that people are more or less the same everywhere. What can I say about America? Power corrupts."

"Dogville" is set in a remote town where a mysterious woman named Grace (Kidman) appears one night on the run from 1930s gangsters. Initially reluctant to take her in, the townsfolk gradually are won over by Grace's earnest desire to help the community in exchange for safe haven.

For a time, it seems Grace has found a happy home among the people of Dogville, whose cast of villagers includes Lauren Bacall, Stellan Skarsgard, Patricia Clarkson, Chloe Sevigny and Ben Gazzara.

Then the law comes to Dogville, hammering up wanted posters of Grace for crimes the villagers know she could not possibly have committed.

Yet their fears have been fanned and they turn on Grace, subjecting her to rape, exhausting servitude and captivity in chains.

Unlike the women subjugated by an unjust world in "Dancer in the Dark" and von Trier's "Breaking the Waves," Grace carries out horrifying retaliation on her oppressors.

"Dogville" challenges viewers on every front. The film has a dense literary quality, running nearly three hours, with windy narration by John Hurt.

The dialogue is highly theatrical, and the sets resemble minimalist stage productions such as Thornton Wilder's "Our Town." The film was shot on an almost bare soundstage, with lines on the floor to mark houses, only a few pieces of furniture, and a row of wooden arches to depict Dogville's abandoned mine. The town dog is represented by a drawing of a canine.

"Dogville" is among a series of dark, risky dramas Kidman has done since her breakout hits "The Others" and "Moulin Rouge," the musical that opened the Cannes festival in 2001.

Kidman won the best-actress Academy Award as suicidal author Virginia Woolf in last year's "The Hours," and she plays an uneducated janitor involved with a disgraced academic (Anthony Hopkins) in the upcoming "The Human Stain."

"I look for things that challenge me," Kidman said. "I think as an actor, you have a certain amount of power, not a lot of power, really, and you know it's fleeting. And I want to put my weight behind directors that interest me."

Kidman and von Trier said they plan two more films following Grace's exploits in America. The director's harsh reimagining of America, though, should not be taken as a condemnation of the United States, von Trier said.

"The film is not a comment on America and how it is," von Trier said. "It's only a comment on the way America is in my head."
Written by David Germain