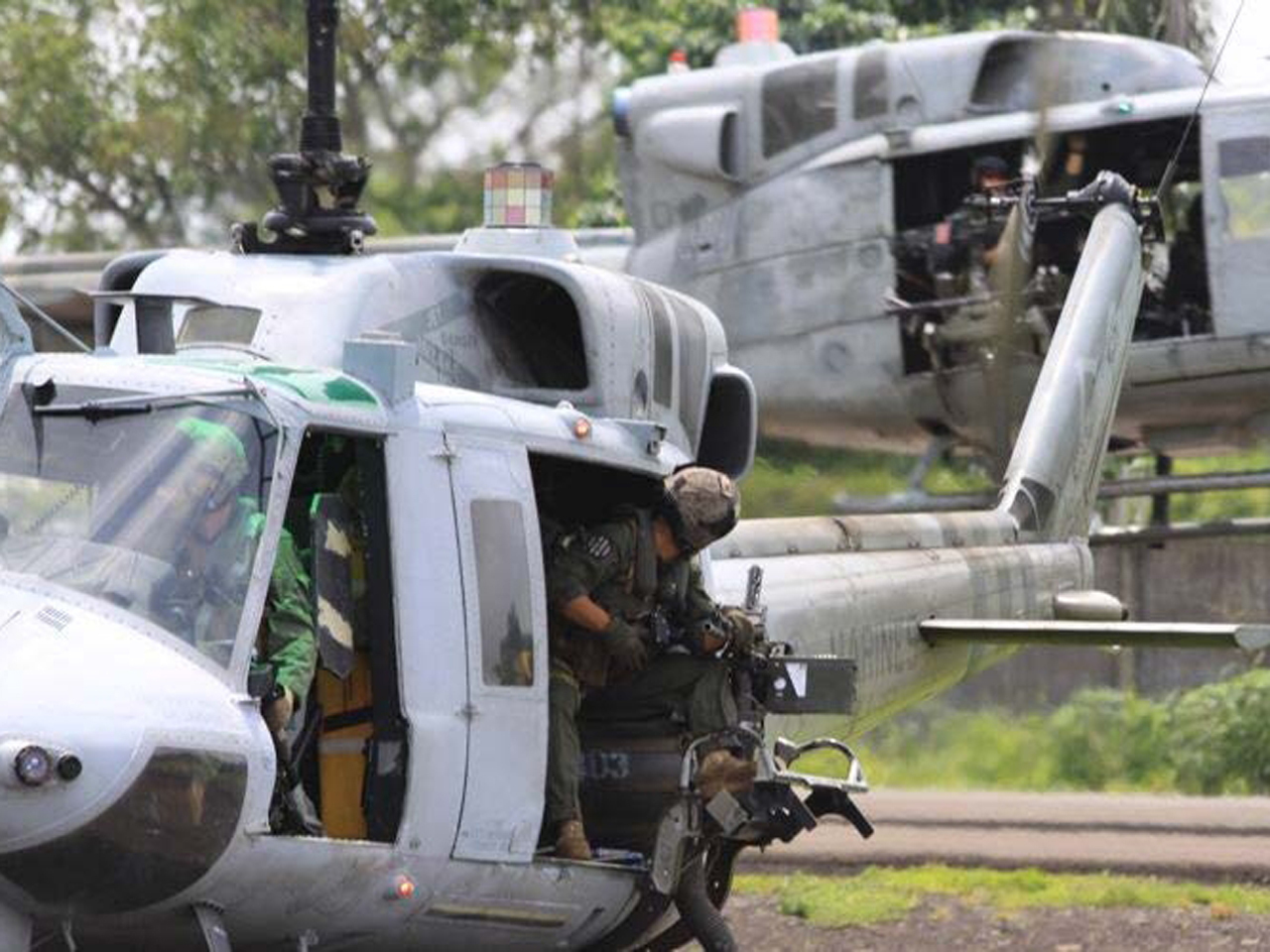 "This is the first Marine deployment that directly supports countering transnational crime in this area, and it's certainly the largest footprint we've had in that area in quite some time," said Marine Staff Sgt. Earnest Barnes at the U.S. Southern Command in Miami.

It was 50 years ago when the U.S. military last sent any significant aid and equipment into Guatemala, establishing a base to support counter-insurgency efforts during a guerrilla uprising. That movement led to 36 years of war that left 200,000 dead, mostly indigent Maya farmers. The U.S. pulled out in 1978.

Guatemalan authorities say they signed a treaty allowing the U.S. military to conduct the operations on July 16. Less than a month later an Air Force C-5 transport plane flew into Guatemala City from North Carolina loaded with the Marines and four UH-1 "Huey" helicopters.

After two weeks of setting up camp, establishing computer connections and training at the Guatemalan air base at Retalhuleu, the Marines ran through rehearsal exercises, Barnes said. Last week, their commander "gave us the thumbs up" to begin active operations, he said.

This week the Marines have been patrolling waterways and the coastline, looking for fast power boats and self-propelled "narco-submarines" used to smuggle drugs along Central America's Pacific Coast. U.S. officials say the "drug subs" can carry up to 11 tons of illegal cargo up to 5,000 miles.

Col. Erick Escobedo, spokesman for Guatemalan Military Forces and Defense Ministry, said that so far the Marines have brought about the seizure of one small-engine aircraft and a car, but made no arrests. He said he expected the Marines to be in Guatemala for about two months.

If the Marines find suspected boats, Barnes said, they will contact their Guatemalan counterparts in a special operations unit from the Guatemalan navy that will move in for the bust. Barnes said the Marines will not go along on arrest missions, but they do have the right to defend themselves if fired on.

Eighty percent of cocaine smoked, snorted and swallowed in the U.S. passes through Central America, according to the Drug Enforcement Administration. Eight out of every 10 tons of that cocaine are loaded on vessels known as "go fasts," which are open hulled boats 20 to 50 feet long with as many as four engines, according to the Defense Department.

In a recent congressional briefing in Washington, Rear Adm. Charles Michel said the boats, carrying anywhere from 660 pounds to almost four tons of cocaine, typically leave Colombia and follow the western Caribbean coastline of Central America to make landfall, principally in Honduras. In the Pacific, the same type of vessels will leave Colombia or Ecuador and travel to Guatemala, Panama, Costa Rica or Mexico, Michel said.

"We fight a highly mobile, disciplined and well-funded adversary that threatens democratic governments, terrorizes populations, impedes economic development and creates regional instability," he said, noting that authorities are able to stop only one out of every four suspected traffickers they spot.

Drug Enforcement Administration special agent Jeffrey Todd Scott said that although the agency has supported Operation Martillo, it has no agents working in Guatemala beyond its normal in-country presence.

This month's Guatemala operation by the Marines comes soon after raids under an aggressive enforcement strategy that has sharply increased the interception of illegal drug flights in Honduras resulted in the death of one person in June and four in May.

U.S. officials said a DEA agent fatally shot a suspected drug trafficker in late June as he reached for his gun in a holster during a raid in a remote northern part of Honduras. That operation resulted in the seizure of 792 pounds of cocaine, the officials said.

A raid on May 11 killed four people, whom locals claimed were innocent civilians traveling a river in Honduras at night. Honduran police said the victims were in a boat that fired on authorities. The DEA said none of its agents fired their guns in that incident.

Both Honduras and Guatemala are struggling with widespread corruption that weakens their rule of law, according to recent State Department reports.

"We're concerned about the impact on Guatemalan civilians, many indigent, who are stuck in the middle of this conflict between drug traffickers and a Guatemalan military known to associate with criminals," said Kelsey Alford-Jones, director of the Guatemala Human Rights Commission/USA in Washington.

The Marine operation is the largest in Guatemala since U.S. military aid was first eliminated in 1978, halfway through the civil war. Over the years, the U.S. Congress has approved limited funding for training Guatemala's military response team for natural disasters.