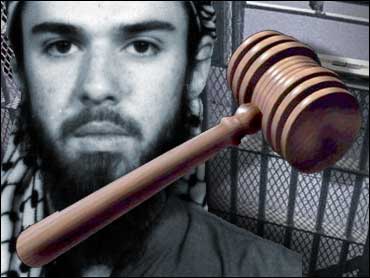 
Plea deals happen in cases large and small because both sides have too much to gain by making them and too much to lose by not making them. That's about the simplest way to explain why both federal prosecutors and John Walker Lindh and his legal team decided that now was as good a time as any to end his conspiracy and terror-aid case.

John Walker Lindh copped a plea early Monday morning because his lawyers feared that U.S. District Judge T.S. Ellis III would rule against them on the key suppression motions that were supposed to take the rest of the week to litigate. Adverse rulings by the judge would have meant that all of Lindh's statements in Afghanistan would have been shown to jurors and that would have dramatically increased the government's chances of convicting "Jihad Johnnie," as some law enforcement types derisively call Lindh.

The defense also sensed, correctly, that the jury pool in Virginia, in the figurative shadow of the Pentagon, would not likely have spawned jurors sympathetic to Lindh. No matter how much he now looks like an All-American when he sits in court. And Lindh's attorneys also knew, and had been reminded recently in the case of fellow American Taliban Yasser Esam Hamdi, that the federal appeals court with jurisdiction over the case, the 4th U.S. Circuit Court of Appeals, is no friend of criminal defendants. So if Lindh would have been convicted on any charges after trial, his chances of having those convictions overturned on appeal would have been virtually nil.

Prosecutors, meanwhile, cut the deal when they did because they were concerned about the public relations beating they would take once it became clear just how badly Lindh was treated by his military captors. Even if the goverment prevailed during the suppression hearing and was able to use Lindh's statements against him at trial, there always would have been a cloud hanging over those statements. Moreover, as prosecutors conceded after the plea deal was entered, the heavily-briefed case had taken a toll on the government's "limited but vital" legal resources. Believe it or not, the mighty federal government sometimes can be matched, brief for brief, argument for argument, case cite for case cite, and in this case it was. The scorched-earthers got their earth scorched.

The feds now can use resources formerly devoted to the Lindh case to help prosecute Zacarias Moussaoui, alleged to be part of a terror conspiracy. And Richard Reid, alleged to have tried to blow up a plane with a shoe bomb. They also can pump Lindh for information about his time with the Taliban to see if he can offer any usable intelligence information which will help U.S. soldiers or law enforcement officials track down more terrorists. They can run stuff by him as they discover it. They can turn him from a nuisance to an asset and that's a large reason why the feds were willing to forego rolling the dice and have a jury decide Lindh's fate.

The deal represents other concessions for the parties. It signals a concession from the government that there really wasn't much "there" in the case against Lindh, regardless of what Attorney General John Ashcroft said publically shortly after Lindh was captured. There was no evidentiary link, for example, between Lindh's actions and the death of CIA Agent Johnny "Michael" Spann, who was killed in a prison riot at the same time Lindh was in custody. Without such a link, the government's conspiracy case against Lindh might have foundered. And apparently there was no evidence linking Lindh to any terrorist activities that led to any deaths, and without that evidence, the terror-related charges might not have prevailed.

Lindh, meanwhile, has conceded through the deal that he was a member of the Taliban and that he carried weapons in anger against their enemies. He's also conceded that his statements to CNN and to military authorities would have been incriminating to him and probably would have convicted him at trial. He's conceded that he wasn't just a misguided youth, a young man who made a mistake, when he joined up with and then stayed fighting for the Taliban after Sept. 11. Twenty years in federal prison may not seem like a long time to some people, but it's a pretty hefty sentence for someone who never actually harmed anyone while in the midst of a war.

The deal is a surprise. Not because it happened but because of when it happened. I always figured there might be a deal at the end of the suppression hearing, after the judge had officially weighed in on Lindh's statements, or at the eve of trial. I always suspected that prosecutors would be afraid to make Lindh the first, official, legal "face of terror." I always figured that Lindh's lawyers would be afraid to beg for mercy from such a law-and-order jury pool. I never figured the deal would come so soon and so suddenly, before any suppression evidence was ever heard.

But we should have known something was up from the way the attorneys acted when they entered the courtroom Monday morning. Defense attorneys were almost giddy. Prosecutors had a spring in their step. James Brosnahan, Lindh's lead attorney, joked with reporters and so did Lindh's father, who looked as relaxed as I have ever seen him.

When U.S. Attorney Paul McNulty came to the courtroom bar he strode toward Brosnahan and glad-handed him the way you see it in the movies. Even Lindh himself, at the center of the storm, flashed a huge smile when he saw his family as he walked into court. Before the deal was announced, it all looked like nervous energy or gallows humor in advance of what everyone figured would be a hard-fought, nasty, week-long hearing. When the deal was announced, it all made perfect sense.