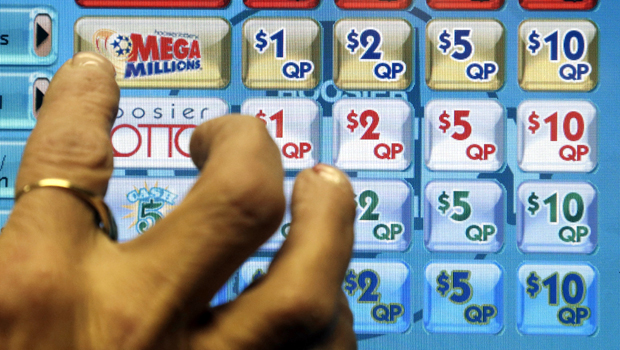 ATLANTA -- Two lucky winning tickets were sold in Tuesday's near-record Mega Millions drawing: one at a tiny newsstand in Atlanta, and the other more than 2,000 miles away in California.

The jackpot, set at $636 million at the time the winning numbers were picked, was going to grow and was likely to wind up closer to $648 million, according to Alex Traverso, a spokesperson for the California Lottery.

Both $636 million and $648 million would be the second largest jackpot in U.S. lottery history. The largest was $656 million.

Newsstand owner Young Soolee grinned as she arrived Wednesday morning at the shop off the lobby of the Alliance Center office building. The newsstand - a small, long shop with one register that can hold perhaps 10 people at a time - is frequented by workers at the office building, which sits across the street from an upscale mall.

"I'm so excited and so happy now," Soolee said. "I love my store and the customer now."

Some media outlets reported that Soolee would receive money as the owner of the store that sold a winning ticket. But Georgia Lottery spokeswoman Tandi Reddick said Wednesday that's not the case. She said Soolee won't get any bonus beyond the 6 percent commission all retail outlets received based on lottery sales.

"They do have the distinction of being known as the lucky store now, and that's always great news for them," Reddick said.

The chances of matching all six numbers in a Mega Millions drawing are about 1 in 259 million. The odds used to be 1 in 176 million, CBS News correspondent John Blackstone reports.

The decrease in probability has increased the amount of rollovers - and propelled jackpots to staggering totals.

Reddick said also the winner has 180 days to claim the prize. The clock began ticking Tuesday. Lottery officials in Georgia will release basic information about the winner, including name and city of residence. Like the policies for store owners receiving bonus money, the number of days and anonymity for the winner varies by state, Otto said in an email.

Buckhead is a financial center of Atlanta and one of its largest neighborhoods, a vast northern area known for upscale shopping centers such as Lenox Square and Phipps Plaza, both a short walk from the store that sold the winning ticket. The Alliance Center is home to a variety of offices - lawyers and financial services professionals, even the Brazilian Consulate General.

The California ticket was sold at Jennifer's Gift Shop, which sits along San Jose's tree-lined Tully Road, amid a cluster of Asian restaurants. The store's owner, Thuy Nguyen, told KNTV he doesn't know who the bought the winning ticket, but it's likely someone he knows - most of his customers are his friends. "I feel good! I don't even know, I can't sleep tonight," Nguyen told the station.

The jackpot was the second-largest lottery prize in U.S. history. It started its ascent Oct. 4. Twenty-two draws came and went without winners, Otto said.

Otto said $336 million in tickets were sold for Tuesday's drawing - they had projected $319 million.

"Sales were a little better than we'd anticipated," Otto said. "It was a fun run; it was our first holiday run for either of the big jackpot games."