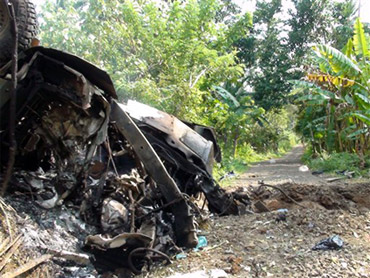 Two U.S. troops were killed in a land mine attack Tuesday by suspected al Qaeda-linked militants in the southern Philippines, officials said.

It was believed to be just the second time U.S. soldiers have been killed in the southern Philippines in violence blamed on the Abu Sayyaf group since American counterterrorism troops were deployed to the region in 2002, and the first fatalities in years.

One Philippine marine also was killed and two others were wounded in the blast on Jolo island, where the Americans have been providing combat training and weapons to Filipino troops battling Abu Sayyaf militants.

Military spokesman Lt. Col. Romeo Brawner said a Philippine military convoy joined by U.S. troops was on its way to an area in Jolo's Indanan township where troops were building two school buildings and digging artesian wells when the land mine exploded.

One U.S. soldier died at the scene, while another who was critically wounded in the blast died a short time later, Brawner told The Associated Press.

CBS News' Barnaby Lo reports that U.S. Ambassador Kristie A. Kenney released a statement saying the troops, "lost their lives serving others and we will always be grateful for their contributions to improve the quality of life on Jolo."

Lo reports that the slain troops were noncombatant members of the U.S. Navy.

"They were not in combat," Brawner confirmed to reporters. "These U.S. soldiers were there in the area to supervise the developmental projects in Indanan."

In a statement, the U.S. Embassy said the deaths happened when the soldiers' vehicle struck an improvised explosive device at about 8:45 a.m. (0045 GMT) during a resupply mission for the school construction project.

The troops were not identified pending notification of next of kin.

Brawner said no suspects were immediately identified, but suspicion immediately fell on the well-armed Abu Sayyaf, which is blamed for numerous bombings, beheadings and kidnappings of Filipinos and foreigners in the south in recent years.

Lo reports that Jolo is Abu Sayyaf's stronghold in the southern Philippines.

Abu Sayyaf has declared a temporary ceasefire in the Philippines, vowing to help local villagers recover from the devastating flooding left in the wake of Tropical Storm Ketsana. At least 240 people have been killed and many thousands more left homeless by the inundation, primarily in the northern parts of the country.

A senior Philippine military commander overseeing counterterrorism campaigns in the south told The Associated Press that Abu Sayyaf had likely planted the landmine in Indanan, where the militants have jungle strongholds. The commander spoke on condition of anonymity because he was not authorized to give information to reporters.

Abu Sayyaf is believed to have about 400 fighters, to have received funds from al Qaeda and is suspected of sheltering militants from the larger Southeast Asian terror group Jemaah Islamiyah.

An estimated 600 U.S. troops are stationed in the Philippines to train and advise their Filipino counterparts in their fight against Abu Sayyaf and other Muslim insurgents in the country's south, reports Lo.

In recent months, however, a Philippine Navy officer has accused U.S. troops of engaging directly in the fighting. The accusation has been repeatedly denied by both the Filipino military and the U.S. Embassy. It has stoked significant protests on the streets of Manila, with demonstrators calling for the immediate withdrawal of all U.S. forces.

The only previous publically known fatality of American service members in the Philippines was the death in October 2002 of a U.S. Green Beret, killed along with two Filipinos when a bomb loaded with nails exploded outside a cafe in Zamboanga city.