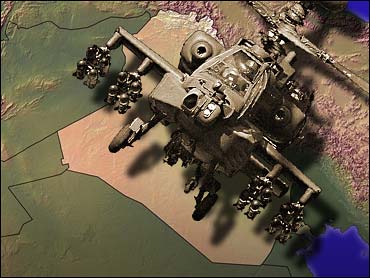 A U.S. Apache attack helicopter crashed Monday north of Baghdad, killing both pilots, after a witness said he saw the aircraft hit by a rocket that "destroyed it completely in the air."

Later Monday, a car bomb exploded between a movie house and Sunni Arab mosque in eastern Baghdad, killing at least four people and wounding 16, authorities said. The New Baghdad area is packed with small shops and markets selling everything from vegetables to clothes, and it usually is crowded with shoppers in the hours before curfew.

The AH-64 crashed in Mishahda, 20 miles north of the capital, and witness Mohammed Naji told Associated Press Television News he saw two helicopters flying toward Mishahda when "a rocket hit one of them and destroyed it completely in the air."

The two pilots were killed in the crash, which is under investigation, said Lt. Col. Clifford Kent, spokesman for the 3rd Infantry Division. At least 1,737 members of the U.S. military have died since the Iraq war began in 2003, according to an Associated Press count.

The relentless carnage has killed at least 1,338 people since April 28, when Prime Minister Ibrahim al-Jaafari announced his Shiite-dominated government. With the Sunni Arab-dominated insurgency targeting the Shiite majority, the wave of killings has raised fears of a possible civil war.

Al-Jaafari said in London that two years would be "more than enough" to establish security in Iraq.

The prison population at three military complexes throughout the country Abu Ghraib, Camp Bucca and Camp Cropper has nearly doubled from 5,435 in June 2004 to 10,002 now, said Lt. Col. Guy Rudisill, a spokesman for detainee operations in Iraq. Some 400 non-Iraqis are among the inmates, according to the military.

The burgeoning prison population has forced the U.S. military to begin renovations on existing facilities, and work has also begun on restoring an old Iraqi military barracks near Sulaimaniyah, 160 miles northeast of Baghdad.

The facility, to be called Fort Suse, is expected to be completed by Sept. 30 and will have room for 2,000 new detainees, Rudisill said.

All renovations should be done by February and are expected to make room for 16,000 detainees in Iraq, he said.

Two weeks ago, the military completed a new 400-detainee compound at Abu Ghraib, which the U.S. government sought to tear down after it became a symbol of an abuse scandal. It was kept in service after the Iraqi government objected. A new compound of the same size should be finished by the end of July at Abu Ghraib, Rudisill said.

The spokesman attributed the rise in the number of prisoners to "successful ongoing military operations against the insurgency and terrorists."

Those operations, however, have not stemmed the daily carnage demoralizing the country of 26 million people. With the Sunni Arab-dominated insurgency targeting the Shiite majority, the wave of killings has slowly been pushing the country toward civil war.

Dozens of foreign fighters have been reported killed in U.S.-led offensives in recent months, including Operation Spear at the porous Syrian border last week, but the deaths have had little effect on the resolve and ability of suicide bombers to strike at will.

Al-Qaida in Iraq, headed by Jordanian-born extremist Abu Musab al-Zarqawi, has claimed responsibility for many of the attacks carried out by such fighters, but there are other insurgent groups, including homegrown factions.

Asked about the situation on Sunday, U.S. Defense Secretary Donald Rumsfeld said it may take as long as 12 years to defeat the insurgents. He said Iraq's security forces will have to finish the job because American and foreign troops will have left the country by then.

The defense secretary also acknowledged that U.S. officials have met with insurgents in Iraq, after a British newspaper reported that two recent meetings took place at a villa north of Baghdad.

"We want to bring people into the political process because that is ultimately how this conflict is going to be resolved," Gen. George Casey, the U.S. commander of the multinational coalition in Iraq, said Monday on CBS News' The Early Show

According to the London Sunday Times, insurgent commanders "apparently came face to face" with four American officials during meetings on June 3 and June 13 at a villa near Balad, about 25 miles north of Baghdad.

Asked on NBC's "Meet the Press" about the report of the two meetings, Rumsfeld said, "I think there have probably been many more than that."

He insisted the talks did not involve negotiations with al-Zarqawi and other suspected terrorists, but were facilitating efforts by the Shiite-led government to reach out to minority Sunni Arabs, who are believed to be the driving force behind the insurgency. Three insurgent groups denied that any meetings had taken place.

A senior U.S. official said earlier this month that American authorities have negotiated with key Sunni leaders, who are in turn talking with insurgents and trying to persuade them to lay down their arms. The official, who did not give his name so as not to undercut the new government's authority, did not name the Sunni leaders engaged in dialogue.

Rumsfeld said on Sunday the insurgency "could go on for any number of years."

"Insurgencies tend to go on five, six, eight, 10, 12 years," Rumsfeld said. "Coalition forces, foreign forces are not going to repress that insurgency. We're going to create an environment that the Iraqi people and the Iraqi security forces can win against that insurgency."

However, the insurgency estimated at about 16,000 Iraqi militants and foreign fighters has drastically overshadowed the improvements and created havoc around the country. The situation has forced the implementation of a daily 11 p.m. curfew in Baghdad.

Car bombings have become one of the most devastating methods used by the insurgency. There have been more than 484 since the handover, killing at least 2,221 people and wounding more than 5,574, according to an AP count.

Unemployment remained high at 27-40 percent in May compared with 30-40 percent in June 2004. About $5 billion of U.S. money still remains from the $18.4 billion reconstruction package approved in 2003, according to the House Appropriations foreign operations subcommittee.