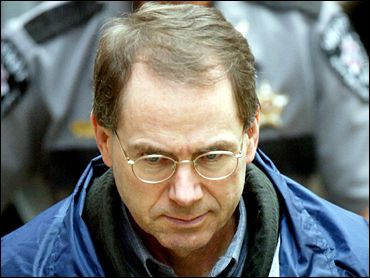 Two members of the jury considering sentencing for Oklahoma City bombing conspirator Terry Nichols were dismissed by the judge Wednesday and were replaced by the last two remaining alternate jurors.

Judge Steven Taylor did not explain what the two jurors did wrong, but he told the rest of the panel not to discuss the case outside of regular jury deliberations.

"Do not discuss sentencing," Taylor said following a one-hour closed meeting with prosecution and defense attorneys. "Do not allow anyone to discuss it with you."

Nichols was convicted last week of 161 first-degree murder charges in the April 19, 1995, bombing of the Oklahoma City federal building, which killed 168 people and injured hundreds more. The jury is considering whether he should be executed or given a sentence of life in prison.

Nichols, 49, was acquitted of federal murder charges in 1997 but convicted of conspiracy and involuntary manslaughter charges in the deaths of eight federal law enforcement officers in the bombing. He was sentenced to life in prison.

Oklahoma prosecutors then charged Nichols in 1999 with the deaths of the 160 other victims and one victim's fetus.

The trial began with 12 jurors and six alternates, but prior to opening testimonies, three jurors were excused because they were distant relatives to a member of the prosecutor's staff. A fourth was excused last month after he had a heart attack.

"This is not good news for prosecutors because it gives them no margin for error should another juror be dismissed for any reason. The law requires a jury of 12 to unanimously vote for a death sentence in order for that sentence to be valid and if this jury loses one more member that cannot happen," says CBSNews.com Legal Analyst Andrew Cohen.

"I suspect this development will cause prosecutors to speed up their presentation. They certainly don't want to risk another problem with another jury that might require the judge to take over sentencing and thus take the death penalty off the table," says Cohen.

More testimony was expected Wednesday in the second day of the sentencing phase. On Tuesday, more than two dozen witnesses — many in tears — testified about loved ones they lost in the bombing as prosecutors argued that Nichols should be put to death for his part in the attack.

The defense urged jurors to consider all sentencing options in the case, including life in prison.

Nichols' relatives, including mother, Joyce Wilt, and sister, Suzanne McDonnell, are expected to plead for his life. Nichols, who did not testify in his own defense, could still testify during the penalty phase.

Nichols was found guilty after prosecutors presented evidence that he bought the explosive ammonium nitrate fertilizer used in the homemade bomb that destroyed the Alfred P. Murrah Federal Building and stole detonation cord, blasting caps and other explosives.

The defense contended others helped executed bomber Timothy McVeigh carry out the bombing and Nichols was the fall guy for a wider conspiracy.

The jury found Nichols guilty just five hours after they began deliberating a verdict. That could prove to be a huge favor for Nichols, says

"By failing even to offer the pretense of deliberative justice, the Nichols jury may have helped prove what defense lawyers have claimed for years: there could be no constitutionally fair trial for Terry Nichols in Oklahoma," said Cohen.

Nichols trial comes more than nine years after the bombing, and almost three years after McVeigh was executed. But questions about the bombing and the investigation that followed have multiplied ever since McVeigh's execution was delayed after thousands of pages of evidence were discovered that had not been shared with his defense team.

In March, the FBI reopened portions of the case to determine whether other conspirators were involved, after it emerged that FBI agents in another case developed evidence suggesting a gang of white supremacist bank robbers might have become involved in McVeigh's conspiracy.

Documents indicate the FBI and prosecutors ordered the destruction in 1999 of evidence from a bank robbery by the group.

It has emerged that senior FBI agents unsuccessfully sought permission in 2001 to interview McVeigh to resolve lingering questions about the case before the convicted Oklahoma City bomber was put to death.

Less than two weeks before McVeigh was executed, the Justice Department received a letter suggesting a key prosecution witness had given false testimony. Prosecutors didn't disclose the allegations to McVeigh's lawyers and later sought to recover all copies of the letter in exchange for a lawsuit settlement.

Last summer, the FBI internal affairs office investigated their crime lab's chief of scientific analysis about his conduct in the bombing case, according to people familiar with the investigation.