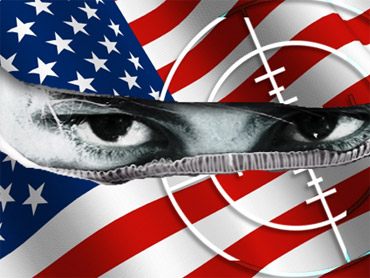 Two New Jersey men who allegedly intended to kill American troops were arrested Saturday at a New York City airport before boarding flights on their way to join a jihadist group in Somalia, a newspaper reported.

Mohamed Hamoud Alessa, 20, and Carlos Eduardo Almonte, 26, were arrested at John F. Kennedy International Airport before they could board separate flights to Egypt and then continue on to Somalia, The Star-Ledger of Newark reported. The newspaper cited officials familiar with the details of the arrests who spoke on condition of anonymity because they were not authorized to discuss the investigation publicly.

Alessa, of North Bergen, and Almonte, of Elmwood Park, were charged with conspiring to commit an act of international terrorism through al-Shabaab, a violent extremist group based in Somalia and connected to al-Qaida, the officials told the newspaper. Al-Shabaab was designated by the U.S. as a terrorist group in 2008.

The FBI and the New York Police Department confirmed to The Associated Press that two men were arrested at the airport, but did not identify them or provide further details. FBI spokesman Richard Kolko in Washington said no threat was made at the airport; New York police spokesmen were not immediately available for comment.

Teams of state and federal law-enforcement agents who have been investigating Alessa and Almonte since 2006 took them into custody, the officials said. They are scheduled to appear Monday in federal court in Newark.

The arrests were made as part of an investigation known as Operation Arabian Knight. Authorities said an undercover NYPD officer had infiltrated the suspects' group of friends and was able to monitor their consumption of jihadist videos and literature, overseas travel preparations, and purchase of airline tickets.

The two men had planned their trip Somalia for several months, saving thousands of dollars, undergoing tactical training and test runs at paintball fields to condition themselves physically, and acquiring equipment and clothing they could use when they joined al-Shabaab in Somalia, the officials said. Both had bragged about wanting to wage holy war against the United States both at home and internationally, investigators said.

Officials said the two men were not planning an imminent attack in the New York-New Jersey area. Both are American citizens, the officials said.

Also Saturday, FBI agents sealed off Alessa's street in his neighborhood at around 10:30 p.m., and FBI agents, local police and the NYPD descended on his home, the newspaper reported. North Bergen police would say only that an investigation was in progress.

Twenty cars with agents and police came to Almonte's home at around 11 p.m., with agents searching the outside of his house and a detached garage, the newspaper reported.

Somalia, an impoverished East African nation of about 10 million people, has not had a functioning government for more than a decade, although the U.S. is backing a transitional government there. The Pentagon's top commander in the region has included Somalia on a list of countries where clandestine American military operations designed to disrupt militant groups would be targeted.