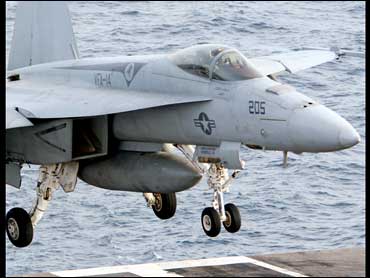 There is no word yet on their injuries, reports CBS News correspondent Bob Orr.

Preliminary reports reveal that these crashes were not due to hostile fire and were unrelated to Monday's confrontation between U.S. warships and Iranian Revolutionary Guard fast boats.

Navy Vice Adm. Kevin J. Cosgriff told reporters that the three pilots have been brought back to the USS Harry Truman, the aircraft carrier they were operating from, and are in good condition. Cosgriff, who is commander of the Navy's 5th Fleet, which is based in Bahrain, said the pilots were undergoing medical checks.

According to the Navy, teams from the Truman rescued the three aviators who ejected after their F/A-18 Super Hornets crashed during operations in the Gulf. The aircraft are from Carrier Air Wing Three, which is deployed to the Persian Gulf with the Truman Carrier Strike Group.

Cosgriff said it was a mid-air collision. Information released by the 5th Fleet said the two aircraft were providing "close air support from Iraq when they crashed."

One of the jets that crashed held two pilots, the other held just one.

The crash occurred at about 1 p.m. EST.