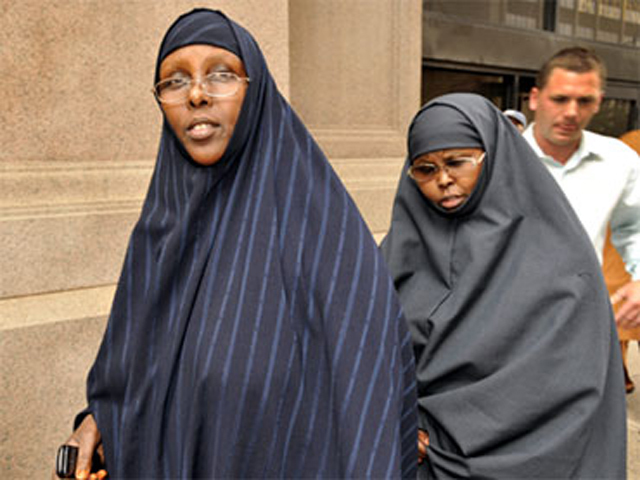 MINNEAPOLIS Two Minnesota women convicted of conspiring to send money to al-Shabab in Somalia were given prison sentences in federal court Thursday, ending a week of punishments tied to long-running investigations into terrorism recruiting and financing for the terrorist group.

Amina Farah Ali was sentenced to 20 years in prison on 13 terrorism-related counts, and Hawo Mohamed Hassan received a 10-year term on one terror-related count and two counts of lying to the FBI.

Ali insisted during her 3-and-a-half-hour hearing in U.S. District Court in Minneapolis that she was only trying to help the poor in the war-torn East African country of which she is a native.

Chief Judge Michael Davis asked Ali whether those who she collected money from knew that it would be going to al-Shabab. The al Qaeda-linked group is at the heart of much of the violence in Somalia in recent years.

"I did not send the money to al-Shabab. Al-Shabab was a vehicle used to get the money to the needy. It was not used for their own purposes," Ali said.

Her attorney, Dan Scott, told the court that al-Shabab was in control of southern Somalia at the time, and that Ali learned that she needed to work with those in power if her money was going to get to its destination.

After the hearing, Scott said he'll recommend that Ali appeal, saying "there's no excuse for that sentence." He declined to comment further.

Ali and Hassan were among nine people sentenced this week for their roles in the federal government's long-running investigations into terrorism recruiting and financing for al-Shabab.

Prosecutors said Ali and Hassan were part of a "deadly pipeline" that sent funds and fighters to al-Shabab. Since 2007, at least 22 young men have left Minnesota in small groups to join the group — a phenomenon that has been called one of the largest efforts to recruit U.S. fighters for a foreign terrorist organization.

Authorities said the women conspired to funnel more than $8,600 to al-Shabab from September 2008 through July 2009. Al-Shabab was declared a terrorist group in early 2008.

Prosecutors said Ali and Hassan went door-to-door in the name of charity and held religious teleconferences to solicit donations, which they then routed to the fighters. Defense attorneys painted the women as humanitarians giving money to orphans and poor people, as well as a group they felt was working to push foreign troops out of Somalia.

At the time, many Somalis in Minnesota were protesting the presence of Ethiopian troops in their homeland. The Ethiopian army was brought into Somalia in 2006 by its weak U.N.-backed government, but the troops were viewed by many Somalis as invaders.

The government's key evidence included hundreds of hours of recorded phone calls, obtained during a 10-month wiretap on Ali's home phone and cellphone. In one call, Ali told others to "forget about the other charities" and focus on "the jihad." In another, she said, "Let the civilians die."

Scott wrote in court documents before the sentencing that Ali was driven from "the most laudable motives; love of god, love of country, a genuine desire to help those displaced by war, to feed the hungry and treat the wounded ... She was not a radical trying to upset the apple cart."

The government had argued that Ali should receive no less than 20 years in prison.

"A significant sentence would serve as a warning to others among the diaspora lest they believe that similar grass roots fund raising on behalf of a designated terrorist organization is a viable avenue to bringing stability and humanitarian relief to Somalia," prosecutors wrote in documents filed before the sentencing.

The case was closely watched by Minnesota's Somali community, which is the largest in the U.S.

In addition to the women's case, 18 men have been charged in the government's investigation into terrorism recruiting and the travels of young men who went to Somalia to fight.

One of those defendants, Adarus Abdule Ali, was sentenced Thursday to two years in prison for perjury. Ali admitted in 2009 that he lied to a grand jury that was investigating the travels of young men from Minnesota to Somalia. Six other men were sentenced earlier this week to prison terms ranging from three years to 20 years.

Another man was sentenced in 2010 to four months in prison and four months of home confinement for obstruction of justice.

The rest of those who face charges are either at large, dead or presumed dead.

The FBI says the investigation is ongoing.