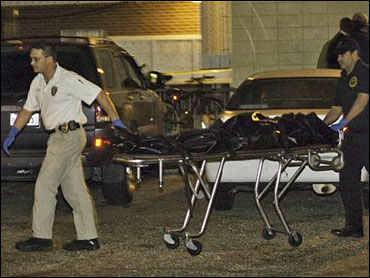 Two students were found shot to death in an apparent home invasion at a Louisiana State University apartment, and officials decided to keep the campus open Friday while police searched for three suspects.

Both men had been shot once in the head, said Charles Zewe, an LSU system spokesman. Three men were seen leaving the area, and police were searching for them.

"From what we're being told, Komma was bound with a computer cable and shot," Zewe said. "The other man was found near the door."

No other violence was reported and the campus was not locked down, though officials were cautioning students about traveling to the university Friday morning and police patrols were increased on campus. Students were taking final exams, and many on the 30,000-student campus had already gone home for the semester break.

"Police actually think it was a straight home invasion and not a concern to the rest of the campus," said Kristine Calongne, a university spokeswoman.

An emergency text message was sent to students registered for an emergency alert system, but not all students received it, the university said. The problem was being investigated.

Calongne said only 8,000 students - less than one-third of the student body - had signed up for cell-phone notification. Officials also sent out an e-mail, voice mail message and posted a message to the LSU Web site. Many campuses implemented such emergency alert measures following the shootings at Virginia Tech earlier this year.

The call that alerted police to the crime was made by Allam's pregnant wife, who returned home and found the men dead, said Srinivasa Pothakamuri, a friend of Komma. Komma, a biochemstry student, was visiting the apartment at the time. Allam was in the chemistry program. Both men were from India, Zewe said.

Pothakamuri said Komma's wife contacted his wife Thursday night, worried that her husband hadn't returned after what he had said would be a 10 minute trip to see Allam. "He never came home," Pothakamuri said. They went to the apartment, and saw police.

The apartment building where the shootings took place is designated for married and graduate students, and is near a field on the 2,000-acre campus where the university's band practices. It is on the edge of the campus, close to one of Baton Rouge's highest-crime areas and near an elementary school. The apartment complex, a cluster of pale yellow cinderblock, three-story buildings, is within sight of the transition offices of Louisiana Gov.-elect Bobby Jindal.

LSU's police department and Baton Rouge Police are both working the case - they are urging students to use caution when moving about the campus, reports CBS News affiliate WWL-TV.

They also said at no time was any part of the campus under lockdown.

The killings were the first homicides on LSU's campus since the early 1990s, Calogne said.