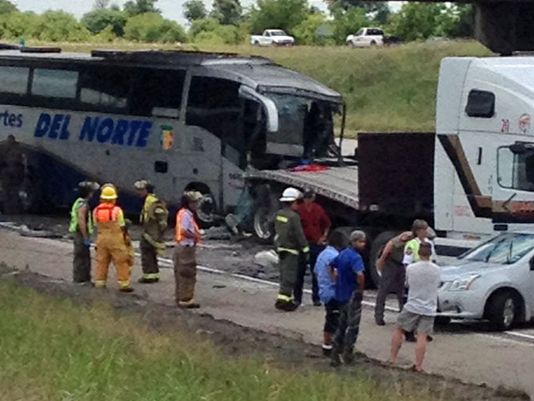 WEIMAR, Tex. --A crash involving a passenger bus, a big rig and another vehicle on a Texas highway killed two people and injured at least 30 others Wednesday.

CBS News affiliate KHOU reported the bus crashed on I-10 near Weimar, Tex., when its driver failed to pay attention when traffic slowed down in a construction area. The bus then hit the back of the rig, causing it to hit a nearby car, according to the Texas Department of Public Safety.

During a press conference, Sgt. William Kennard said the bus driver was killed and a passenger was ejected and died. All passengers on board were treated for various injuries, he said. The driver of the car was not injured.

All of the dead and injured were on board the bus. The injured passengers were taken to hospitals in Columbus and La Grange.

The bus belonged to a company called Transportes Del Norte, a passenger line that takes people between Mexico and several Texas cities, according to its website. The bus was traveling to North Carolina from Laredo, Texas said Kennard.