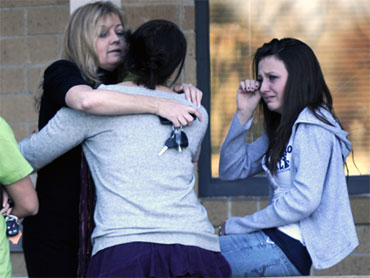 A teacher tackled a man armed with a high-powered rifle just after two teenage students were shot Tuesday at a suburban Denver middle school that's just miles from Columbine High School, the site of one of the nation's deadliest school shootings, authorities said.

One male and one female were shot at about 3:30 p.m. outside Deer Creek Middle School in Littleton, Jefferson County Sheriff's office spokeswoman Jacki Kelley said. Both students were taken to a nearby hospital and were expected to survive.

Student Steven Seagraves said he was about 10 feet away when an adult approached students and asked them: "Do you guys go to this school?"

When the students said they did, he shot them, Seagraves said.

Seventh-grade math teacher David Benke, a 6-foot-5 inch former college basketball player who oversees the school's track team, tackled the suspect as he was trying to reload his weapon.

"He was trying to rack another round. He couldn't get another round in before I got to him so I grabbed him," Benke said, recalling that he didn't have time to fear for his life.

Benke's wife said her husband called her after the shooting.

"He said there was a shooting and that he had to tackle the gunman," Sandra Benke said. She said her husband was upset that he couldn't reach the shooter before two rounds were fired. "He said 'It was one of my students."'

Authorities haven't released the victims' names, but say they both had surgery Tuesday evening.

Bus driver Steve Potter said he was about to pull away from the school with a full bus when he heard a loud bang that sounded like an M-80 firecracker. Students screamed when they spotted the man with a rifle, Potter told KMGH-TV.

"He looked like he was just kind of looking around for someone to shoot," he said.

Potter said he saw Benke grab the suspect so he and another man jumped on the gunman and helped hold him until police arrived.

"He's the real hero," Potter said of Benke. "All the credit goes to him."

The suspect's name hasn't been released, but authorities say he's 32 and that he doesn't appear to have any connection to the school. He's expected to make his first court appearance Wednesday morning and may face at least two counts of attempted murder.

Kevin Zwolinski, another student, said he had just boarded a school bus when he heard two shots and saw one of the victims fall to the ground.

"I thought it could have been like a tire might have been popped, but as soon as I turned around and saw everyone running I knew it was a gun," he said.

Zwolinski said everyone on the bus was told to lie silently on the floor until authorities arrived.

The school is about three miles southwest of Columbine High School, where two teens - Dylan Klebold and Eric Harris - killed 12 students and a teacher and wounded 23 others before killing themselves in 1999.

The middle school was temporarily locked down with about 30 students in the building. They were eventually taken to a nearby elementary school, where they were to meet up with their parents.

Kelley said authorities don't yet have a motive for the shootings.

"Why this school, why this happened, why these students, we don't have any of those answers yet," she said.