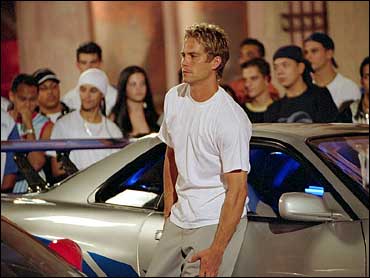 A movie about streetcar racing was too much too soon for an animated film about a missing fish.

"2 Fast 2 Furious" took in over $52 million in its opening weekend, pushing "Finding Nemo" into second place with $45.8 million while Bruce Almighty slipped to third place with $21.7 million.

The sequel to "The Fast and the Furious" took in more than $12 million more than the original did in its opening weekend- proving the attraction of the cars to moviegoers despite the absence of action star Vin Diesel, who did not return for the sequel. Paul Walker was paired this time with Tyrese Gibson, as a street racer infiltrating a smuggling ring among Miami hot-rodders.

With or without Diesel, "the cars are the stars," said Nikki Rocco, head of distribution for Universal, which released both movies. "It's a great, multicultural, exciting little piece of entertainment. Just what teenagers are looking for."

Three-fourths of the audience was younger than 25, and "2 Fast 2 Furious" drew a broad ethnic mix, with Hispanics making up 38 percent of viewers and blacks accounting for 16 percent, the studio said.

The Disney-Pixar collaboration "Finding Nemo," whose $70.3 million debut a week earlier was the best ever for an animated flick, pushed its 10-day total to $143.3 million. That was about $21 million ahead of the 10-day total of "Monsters, Inc.", the Disney-Pixar tale that was the previous record holder for best animated debut.

With youngsters getting out of school for summer, "Finding Nemo" has a good shot at passing the $256 million total gross of "Monsters, Inc.," which did much of its business during the school term in November and December of 2001, said Chuck Viane, Disney head of distribution.

"In summer, every day's a holiday," Viane said. "That really bodes well for the length of run for our movie."

The overall box office soared, with the top 12 movies grossing $157.1 million, up 52 percent from a relatively quiet weekend a year ago, when "The Sum of All Fears" remained the top film for the second-straight week.

Despite two straight weekends of increased revenues, the box office so far this year continues to lag 4 to 5 percent behind Hollywood's haul in 2002, when the industry took in a record $9.5 billion.

After a slow winter and spring, Hollywood has rebounded with such blockbusters as "The Matrix Reloaded," whose $9.1 million weekend pushed its total to $247.7 million, and "X2: X-Men United," which grossed $3.05 million to lift its gross to $204.3 million.

"We're chipping away at this deficit and trying to regain some sort of lead over last year," said Paul Dergarabedian, president of box-office tracker Exhibitor Relations. "We've had two big up weekends in a row, and by mid to late summer, we could be ahead of last year."

Likely hits arriving over the next month include "The Hulk," "Charlie's Angels: Full Throttle," "Terminator 3: Rise of the Machines" and "Legally Blonde 2: Red, White & Blonde."

Jonathan Metz: How I Tried to Cut Off My Arm