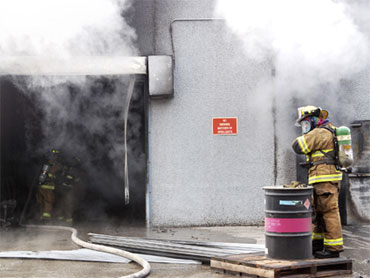 Company officials now say two workers have been killed in an explosion at a small chemical plant in West Virginia. Two more people were injured.

Officials with AL Solutions Inc. said earlier Thursday night that three workers had been killed. Company chief financial officer Ken Kline says that statement was incorrect and was based on information from emergency workers.

Firefighters were still putting out hot spots from a fire at the plant Thursday afternoon. New Cumberland Police Chief Lester Skinner said the emergency call about the blast at the AL Solutions Inc. plant came in around 1:20 p.m.

Lt. Jeremy Krzys, the first officer on scene, said he had been sitting at a traffic light when he heard the blast and immediately rushed to the plant.

"I just heard a loud bang and all of a sudden you saw black smoke pouring out," Krzys said.

Krzys said he saw two injured men run out of the building when he arrived. He said one man was badly burned, while the other was still on fire. Krzys says co-workers used blankets to extinguish the man who was on fire.

Company officials said in a statement that the worker who was badly burned died later after being transported from the scene for medical treatment. The other injured person, who was an employee for an outside contractor, suffered minor burns.

None of the victims has been identified, though Skinner said he knew both of the men who died and had grown up with them.

The plant site is home to a large, corrugated metal building complex and a smaller stucco building that sits across the parking lot, which is where the men were working. Skinner said they were working with titanium powder, which is used as an alloy additive in aluminum.

The powder is packed into bricks that look similar to hockey pucks, Skinner said. It's highly flammable, which is why firefighters had to finish extinguishing hotspots before investigators could get to the dead men inside.

"It's not like putting out a brush fire or wood," Skinner said.

AL Solutions was formerly called Jamegy Inc. The company website says it also has a plant in Missouri.

At the Mid-Ridge Cafe, which sits along the main highway that leads into town and overlooks the plant, waitress Sandy Lemasters said she didn't hear the blast that was just a mile away. But it didn't take long for people to start coming in to talk about what happened.

People who came in said the men who died were two brothers from the town, Lemasters said.

"They came in and said there were two dead," she said. "It's a shame. That's the third time it's happened there."

In August 1995, a worker was killed and another injured when an explosion and fire ripped through the plant when it was operated by Jamegy.

In 2006, another worker died following an explosion and fire in a production building.