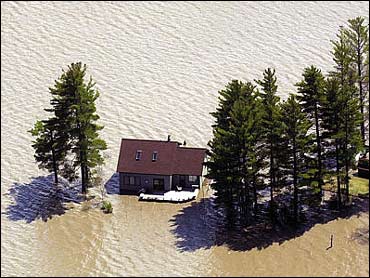 Two dams failed as a churning, sediment-laden Dead River uprooted trees and destroyed bridges, forcing some 1,800 people from their homes in the Upper Peninsula's largest city.

"This is the worst in anybody's memory that I've talked to," Fire Chief Tom Belt said Thursday afternoon as he peered over the ruins of a two-lane bridge.

"Miraculously, no one was hurt," he said.

Governor Jennifer Granholm declared a state of emergency in Marquette County late Thursday, meaning state resources would be made available.

There were no reports of flooded homes, but authorities said flood waters scoured riverbanks and chewed up residential and public property. Trees, logs, railroad ties and other flood debris bobbed in Lake Superior, where the deluge emptied.

Authorities ordered the evacuation of 485-acre area on the city's north side early Thursday as waters from washed-out dams advanced, spurred in part by debris. Residents were evacuated to a local gymnasium and an arena, where Red Cross workers provided cots and other necessities.

Some residents expect to return home early Friday. Others are stranded until officials devise a makeshift bridge to span the river from the mainland to Presque Isle.

One of the ruptured dams generates electricity for Marquette but power was not interrupted, officials said.

John Collins said a police officer knocked on his door Thursday morning and told him: "Get out. Get out. Leave and don't come back."

Collins said Thursday was his 52nd birthday. He spent the afternoon trying to figure out where to stay the night.