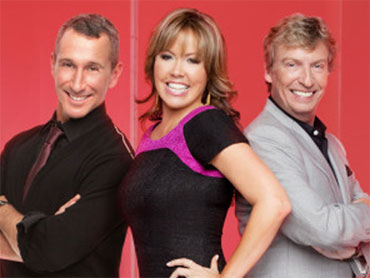 It was the last dance for Noelle Marsh and Nathan Trasoras, who were eliminated from "So You Think You can Dance?" in Wednesday night's results show, leaving eight dancers to compete for this season's title.

In the bottom four and also performing solos Wednesday were contemporary dancer Kathryn McCormick and ballroom dancer Ryan Di Lello. Some judges said they were shocked by the results, which is based on audience voting.

Photos: "So You Think You Can Dance?"

Noelle and Ryan kicked off Tuesday night's competition with a hip-hop routine which won praise from all three judges for the new partnership. Their second dance, a waltz to "Jeux d'eau" from a Cirque du Soleil soundtrack, was called hypnotizing by Judge Adam Shankman and regal by Judge Nigel Lythgoe. Judge Mary Murphy called Noelle "breathtaking."

A contemporary dancer from North Carolina, Noelle, 18, danced a solo to "Every Time It Rains."

Nathan was paired with Kathryn McCormick and they performed a Broadway routine to "Choreography" from the 1950s movie "White Christmas." Murphy told Kathryn she made difficult routine s seem easy and Shankman said he was impressed with the confidence Nathan showed.

Their second performance was a rumba to "Walk On By," which judges criticized for lacking passion and chemistry.

Nathan, who also is 18 and a contemporary dancer, has been criticized by judges this season for performances lacking in maturity, but on Wednesday, several judges commented on his growth during the show. A California native, he gave a tearful appreciation to his parents Tuesday night, when he also performed a solo to "Golden Train" by Justin Nozuka.

Snoop Dogg was the musical guest and Legions of Extraordinary Dancers was the dance act.