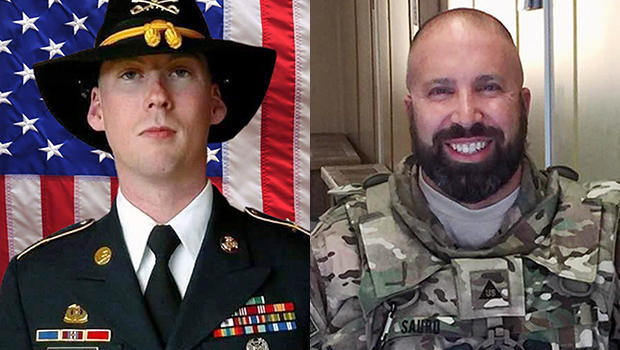 FAIRVIEW, Ill. -- A decorated U.S. soldier from Illinois and an Army civilian employee from Oklahoma who both had been deployed multiple times to support military operations in Afghanistan were killed in an attack this week in Kabul, the Defense Department said.

“Mike was the type of person who no matter what you asked of him, he was always willing to lend a helping hand to everybody,” said Deborah Schreiner, chief of HAZMAT Training at the Defense Ammunition Center, Oklahoma, where Sauro was assigned. “He was such a joy to work with and always so upbeat.”

Riney entered active-duty service in July 2012 as a petroleum supply specialist, the military said. He had been assigned to the Support Squadron, 3rd Cavalry Regiment, 1st Cavalry Division at Fort Hood, Texas, since December 2012.

Riney was married and had young children, James and Elea, and was a volunteer firefighter, said U.S. Rep. Cheri Bustos. His remains arrived at Dover Air Force Base in Delaware on Friday morning.

Sauro was assigned to the Defense Ammunition Center, McAlester Army Ammunition Plant in McAlester, Oklahoma, the Defense Department said. He traveled to Afghanistan last month for his third deployment and was scheduled to return to the U.S. in March.

The two U.S. civilians injured also were from the Defense Ammunition Center. Richard “Rick” Alford was in stable condition and Rodney Henderson suffered minor injuries, the center said, adding that they will both return to the U.S.

Dawlat Waziri, spokesman for the Afghan defense ministry, earlier this week said the attack took place inside a military base in Kabul. NATO said the attacker was later killed. The victims were conducting duties as part of the larger NATO mission to train and advise the Afghan security services.