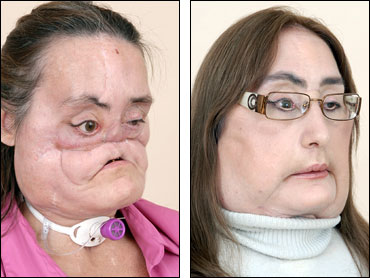 When Connie Culp heard a little kid call her a monster because of the shotgun blast that left her face horribly disfigured, she pulled out her driver's license to show the child what she used to look like. Years later, as the nation's first face transplant recipient, she's stepped forward to show the rest of the world what she looks like now.

The lead surgeon in the operation spoke to The Early Show Wednesday.

Her expressions are still a bit wooden, but she can talk, smile, smell and taste her food again. Her speech is at times a little tough to understand. Her face is bloated and squarish. Her skin droops in big folds that doctors plan to pare away as her circulation improves and her nerves grow, animating her new muscles.

But Culp had nothing but praise for those who made her new face possible.

"I guess I'm the one you came to see today," the 46-year-old Ohio woman said at a news conference at the Cleveland Clinic, where the groundbreaking operation was performed. But, "I think it's more important that you focus on the donor family that made it so I could have this person's face."

Until Tuesday, Culp's identity and how she came to be disfigured were a secret.

Culp's husband, Thomas, shot her in 2004, then turned the gun on himself. He went to prison for seven years. His wife was left clinging to life. The blast shattered her nose, cheeks, the roof of her mouth and an eye. Hundreds of fragments of shotgun pellet and bone splinters were embedded in her face. She needed a tube into her windpipe to breathe. Only her upper eyelids, forehead, lower lip and chin were left.

A plastic surgeon at the Cleveland Clinic, Dr. Risal Djohan, got a look at her injuries two months later. "He told me he didn't think, he wasn't sure, if he could fix me, but he'd try," Culp recalled.

She endured 30 operations to try to fix her face. Doctors took parts of her ribs to make cheekbones and fashioned an upper jaw from one of her leg bones. She had countless skin grafts from her thighs. Still, she was left unable to eat solid food, breathe on her own, or smell.

Then, on Dec. 10, in a 22-hour operation, Dr. Maria Siemionow led a team of doctors who replaced 80 percent of Culp's face with bone, muscles, nerves, skin and blood vessels from another woman who had just died. It was the fourth face transplant in the world, though the others were not as extensive.

"Here I am, five years later. He did what he said - I got me my nose," Culp said of Djohan, laughing.

In January, she was able to eat pizza, chicken and hamburgers for the first time in years. She loves to have cookies with a cup of coffee, Siemionow said.

Siemionow stressed to Early Show co-anchor Maggie Rodriguez Wednesday that the operation was "absolutely" not cosmetic. "This is a very important message to just present here, that this is all about functional reconstruction," she said. "We all are taking for granted daily activities such as just drinking a cup of coffee. And a cup of coffee is almost a symbol, with a cookie, which she was not enjoying for the last few years of her life."

No information has been released about the donor or how she died, but her family members were moved when they saw before-and-after pictures of Culp, Siemionow said.

Culp said she wants to help foster acceptance of those who have suffered burns and other disfiguring injuries.

It's a role she has already practiced, said clinic psychiatrist Dr. Kathy Coffman.

Once while shopping, she heard a little kid say, `You said there were no real monsters, Mommy, and there's one right there,"' Coffman said. Culp stopped and said, "I'm not a monster. I'm a person who was shot," and pulled out her driver's license to show the child what she used to look like, the psychiatrist said.

Culp, who is from the small town of Unionport, near the Pennsylvania line, told her doctors she just wants to blend back into society. She has a son and a daughter who live near her, and two preschooler grandsons. Before she was shot, she and her husband ran a painting and contracting business, and she did everything from hanging drywall to a little plumbing, Coffman said.

Culp left the hospital Feb. 5 and has returned for periodic follow-up care. She has suffered only one mild rejection episode that was controlled with a single dose of steroid medicines, her doctors said. She must take immune-suppressing drugs for the rest of her life, but her dosage has been greatly reduced and she needs only a few pills a day.

The clinic expects to absorb the cost of the transplant because it was experimental, doctors said. Siemionow estimated it at $250,000 to $300,000. That is less than the $1 million that other surgeons estimate it costs them to treat other severely disfigured people through dozens of separate operations, she said.

Also at the Cleveland Clinic is Charla Nash of Stamford, Conn., who was attacked by a friend's chimpanzee in February. She lost her hands, nose, lips and eyelids, and will be blind, doctors said. Clinic officials said it is premature to discuss the possibility of a face transplant for her.

In April, doctors at Harvard-affiliated Brigham and Women's Hospital in Boston performed the nation's second face transplant, on a man disfigured in a freak accident. It was the world's seventh such operation. The first, in 2005, was performed in France on Isabelle Dinoire, a woman who had been mauled by her dog.