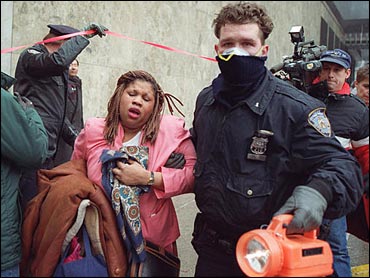 After planting a bomb in the underground garage of the World Trade Center on a chilly February day, Ramzi Yousef retreated across the Hudson River, where he hoped to watch the twin towers fall.

It would take nearly a decade for his vision to be realized.

The first terrorist attack on the trade center - which took place 10 years ago Wednesday, on Feb. 26, 1993 - blew a hole half the size of a football field in the basement, killed six people and injured over 1,000 others who escaped through smoky stairwells.

Reflecting on the anniversary of the bombing, two top law enforcement officials said the nation badly underestimated the terrorist threat to come. And, in interviews with The Associated Press, they said investigators failed to adjust as the terrorists grew more sophisticated.

"It should have been a wake-up call for America," said New York Police Commissioner Raymond Kelly, who held the same position at the time. "We simply didn't see it as an international conspiracy to destroy our society."

The significance of the attack "was not fully understood by the critical mass of the United States until Sept. 11, 2001," said James Kallstrom, a former FBI assistant director who is now Gov. George Pataki's senior adviser on terrorism.

The notion of terrorism on U.S. soil was so distant in 1993 that authorities first assumed the explosion was an accident. But testing detected nitrates at the crater - the first sign that a crude bomb was the real cause.

Within days, the FBI had identified a small group of Middle Eastern men living in New Jersey as the culprits. The men were so desperate for cash that one was caught trying to retrieve a $400 deposit for the rental van destroyed in the blast.

That bomber's arrest "was a sigh of relief," Kelly said. "It gave the sense that we were dealing with an ad hoc group of amateurs."

Authorities vowed to track down the terrorists, punish them and stop future attacks. And for a while, they appeared successful: Agents arrested a suspect who ordered some of the bomb's chemicals; another was captured within weeks in Egypt.

The FBI even infiltrated a second group of men who shared the trade center bombers' radical Islamic views, including a blind Egyptian sheik, Omar Abdel-Rahman. He and others were arrested on charges they were plotting to blow up two tunnels and a bridge, the United Nations and the building housing the FBI - all in a single day.

By 1995, many of the men connected with the bombing and the landmarks plot had been caught, convicted and sentenced to life in prison. And Yousef, the mastermind of the bombing, was on the run with a $2 million FBI reward offered for his capture.

Despite its successes at the time, though, law enforcement faced troubles from within.

"During that period of time, we built the Chinese wall between counterterrorism agents and criminal agents higher and higher every year," Kallstrom said. "We did less intelligence sharing, not more."

And the landmarks plot - which called for simultaneous strikes at multiple targets - proved that terrorists were capable of shifting tactics to stay ahead of investigators. As their sophistication grew, so did their financial backing.

Court testimony shows the 1993 trade center conspirators spent only about four months plotting the attack, and drew on a bank account of less than $10,000.

The 1995 capture of Yousef in Pakistan signaled the emergence of a wealthy benefactor: Osama bin Laden. Yousef was found in a guest house for Afghan war veterans financed by bin Laden. He had sought refuge there after failing in a plot in the Philippines to kill 4,000 people by blowing up 12 U.S.-bound airliners.

A computer used by Yousef and interrogations of another terrorist who lived with him in Manila revealed that several Middle Eastern pilots were training at American flight schools. At least one had proposed hijacking a plane to crash into federal buildings.

Authorities came to believe Yousef was among a cadre of Islamic warriors who were being trained in Afghanistan to fight for bin Laden in a holy war against the United States.

But U.S. investigators remained one step behind bin Laden and his al Qaeda network, whether they were orchestrating the 1998 bombing of two U.S. embassies in Africa that killed 224 people, or the 2000 bombing of the USS Cole in Yemen that killed 17 sailors.

Kallstrom said investigators were doomed by the flaws in the gathering and sharing of intelligence, and a lack of will to fix the problem. It took Sept. 11 to drive home the lessons of the 1993 bombing, he said.

"We just never as a nation responded the way, in my view, we should have responded," he said. "It's a lot easier to have consensus when you have 3,000 people dead on the streets of New York and the Pentagon."