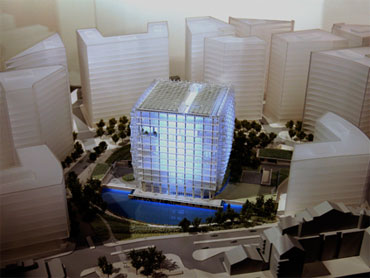 (AP Photo/Kirsty Wigglesworth)
The United States is building its most expensive embassy ever in London, complete with a moat to protect it.

The U.S. State Department has increased security at its embassies across the world in the past decade, but efforts to increase security at its historic embassy in London led to a protracted battle with the building's neighbors, according to The Times of London. Consequently, the U.S. is building a $1 billion new, high-security facility in a less dense part of London.

The 12-story building, designed by Philadelphia-based architecture firm Kieran Timberlake, will use its surrounding natural setting to protect it from potential terrorist threats -- a meadow, woodland and a moat will buffer the embassy the main road.

"We were able to use the landscape as a security device," James Timberlake, a partner with Kieran Timberlake, told the Associated Press.

Timberlake also reportedly said the embassy is designed to be "open and welcoming, a beacon of democracy."

The building will be in "crystal form," Timberlake said, and will be both light-filled and light-emitting. It is also designed to be one of the greenest embassies, with energy-absorbing material lining the exterior, solar panels on the roof, and a rain collection system that will keep the building self-sufficient in water.

Adam Namm, acting director of the Bureau of Overseas Buildings Operations, said the $1-billion building would be "in the ballpark of the most expensive embassies we have built," the AP reports.

The United States' current embassy at London's Grosvenor Square dates back to the late 18th century and served as Gen. Dwight D. Eisenhower's headquarters during World War II. While the Grosvenor Square embassy is near expensive restaurants and boutiques, the new building will be in the Nine Elms area of Wandsworth, a district "under transition," according to the AP. The Times described the site as "known for its gay clubs."

Construction on the new building will start in 2013, the AP reports, and is slated to be completed by 2017.