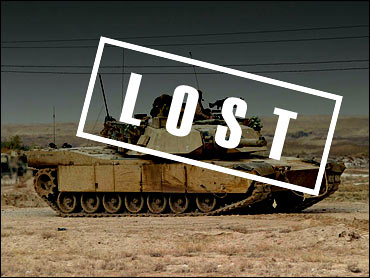 This story was written and reported by Laura Strickler of the CBS News Investigative Unit.


Tractor trailers, tank recovery vehicles, crates of machine guns and rocket propelled grenades are just a sampling of more than $1 billion in unaccounted for military equipment and services provided to the Iraqi security forces, according to a new report issued today by the Pentagon Inspector General and obtained exclusively by the CBS News investigative unit. Auditors for the Inspector General reviewed equipment contracts totaling $643 million but could only find an audit trail for $83 million.

The report details a massive failure in government procurement revealing little accountability for the billions of dollars spent purchasing military hardware for the Iraqi security forces. For example, according to the report, the military could not account for 12,712 out of 13,508 weapons, including pistols, assault rifles, rocket propelled grenade launchers and machine guns.

The report comes on the same day that Army procurement officials will face tough questions from the Senate Armed Services Committee regarding their procurement policies. One official, Claude Bolton, assistant secretary for acquisition, logistics and technology has already announced his resignation on the heels of sharp criticism of army contracting. Bolton's resignation is effective Jan. 2, 2008. The Army has significantly expanded its fraud investigations in recent months.

The report is scheduled for official release Thursday afternoon. Check back with CBSNews.com for more on this developing story.