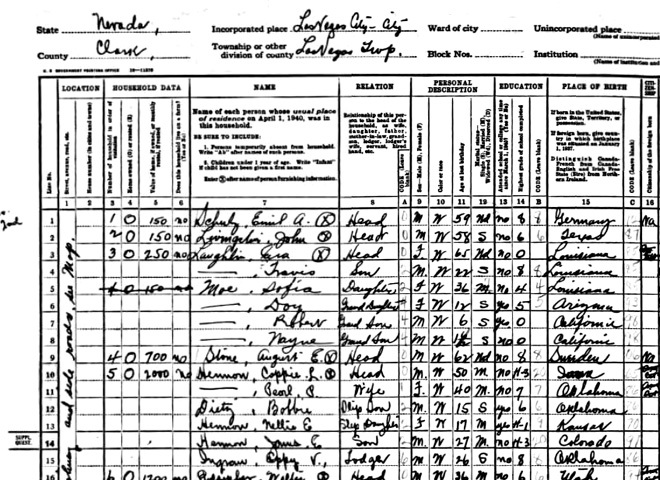 (CBS News) It's Christmas for genealogists - the 1940 U.S. census was released Monday, 72 years after Americans were enumerated on the heels of the Great Depression and the eve of World War II.

The Census Bureau released images of the completed census forms listing more than 132 million Americans, and announced details of a "crowd-sourcing" project being manned by researchers and 100,000 volunteers to compile the information in the census forms' data fields into an index searchable by name.

In addition to information about respondents' birthplace, citizenship status, occupation and race, the 1940 census for the first time asked about wages and income, housing (i.e., home value and mortgage or rent paid), and a measurement of transients.

The surveys also collected data on employment status, education and military service - even which homes had radios and flush toilets.

The questions asked during the 1940 enumeration were to help the U.S. government understand how the Great Depression - and FDR's New Deal - affected Americans. In fact, nine questions were about Social Security. (The Census Bureau stressed that no Social Security numbers are being released.)

The census was conducted prior to the 1940 draft, so while it may not have information about a forebear's World War II service, the data would show how a serviceman's family was living before the U.S. entered the conflict in 1941.

By law census data is held 72 years until it is made public. In a possible sign of how eagerly genealogists and hobbyists exploring their family history have awaited this new release, the Census Bureau website showed signs of heavy traffic, producing lots of "hourglassing" during a demonstration of the site's search capability at the National Archives Monday.

Bureau officials said they are eager to see the public's response to the release given that - as life expectancy has increased in America - approximately one in six people who were counted in the 1940 census were around to be counted again in 2010, raising the specter of privacy concerns for the 21 million people still alive today who were mere children in 1940.

The census maps break down into enumeration districts (EDs), which are vital to searching for street names and numbers. An easy Internet tool will help translate a known street addresses to an ED to assist searching.

However, the digital images that are being released and the search tools used to locate specific addresses are being augmented by researchers and volunteers who will be compiling a searchable index of names and other data.

The 1940 U.S. Census Community Project, a crowd-sourcing project of Archives.com, FamilySearch, and findmypast.com, will use researchers and volunteers from around the country to index the information in each census page's fields so they are may be entered into a database searchable by name.

There were will be two people indexing every line, which will be proofed and adjudicated in case of a discrepancy. It will take several months to complete the index and post it online.

Already 100,000 Americans have volunteered to contribute, although another 200,000 are needed.

David Sicilia, a professor at the University of Maryland at College Park, said that the census will help us better understand the lives of ordinary Americans, "although there was little that was ordinary about them."

Sicilia said that helping us study how our forebears withstood the Great Depression "can only make us a little wiser" as our generation steps out of a Great Recession.

While the census measured U.S. population as 131.6 million in 1940, plus another 2.4 million in Alaska, Hawaii and U.S. territories (compared to 308.7 million total in 2010), the data also showed a less racially diverse nation. In 1940, the population was 89.8 percent white, 9.8 percent black, and the rest counted as "other." In 2010, the percentage of the white population dropped to 72.4 percent, African-Americans accounted for 12.6 percent, Hispanics or Latinos were 16.3 percent, and Asians made up 4.8 percent. Respondents who identified themselves as more than one race comprised 2.9 percent of the more recent survey.

Americans also are staying single longer. In 1940, 11.6 percent of women 19 or younger were already married, and more than two-thirds (68 percent) between ages 20 and 34 were married.