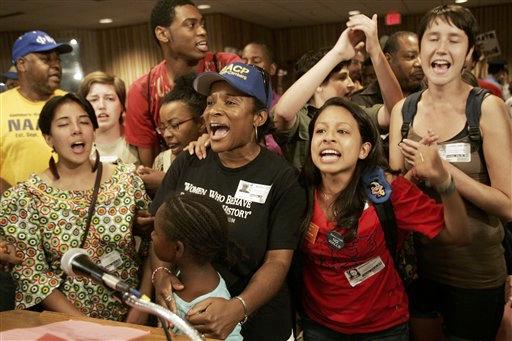 RALEIGH, N.C. (CBS/AP) Protesters took over a school board meeting in North Carolina on Tuesday after claims that a new busing system would resegregate schools, causing racial tensions reminiscent of the 1960s.

Nineteen people were arrested, including the head of the state NAACP chapter who was banned from the meeting after a trespassing arrest at a June school board gathering.

"We know that our cause is right," the Rev. William Barber said shortly before police put plastic handcuffs on his wrists before the meeting started.

Inside, more than a dozen demonstrators disrupted the meeting by gathering around a podium, chanting and singing against the board's policies.

After several minutes, Raleigh police intervened and asked them to leave. When they refused, the officers grabbed arms and tried to arrest the protesters. One child was caught in the pushing and shoving, as was school board member Keith Sutton, who was nearly arrested before authorities realized who he was.

"Hey, hey, ho, ho, resegregation has got to go," some protesters chanted.

Sutton, the only black member of the board, said he went into the crowd to try and calm things down and encourage officers not to use such strong force. He said he felt insulted that he almost got arrested and believes the officer who tried to detain him owes him an apology.

The Wake County School Board has voted multiple times over the last several months to scrap the district's diversity policy, which distributed students based on socioeconomics and for years had been a model for other districts looking to balance diversity in schools. Several school board members elected last year have built a majority in favor of focusing on neighborhood schools.

The board's chairman, Ron Margiotta, said the panel would not be distracted in its effort to "provide choice and increased stability for families."

Woman found dead in 1971 identified with help of crowdfunded DNA testing
Thanks for reading CBS NEWS.
Create your free account or log in
for more features.
View CBS News In
CBS News App Open
Chrome Safari Continue
Be the first to know
Get browser notifications for breaking news, live events, and exclusive reporting.