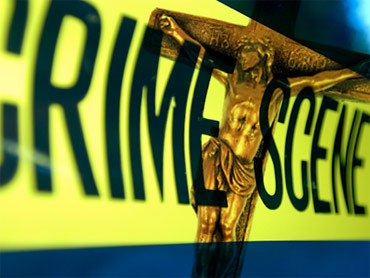 (CBS/iStockphoto)
ROCKVILLE, Md. (AP) A Maryland man has been convicted of attempted murder for beating his estranged girlfriend at least 20 times with an 18-pound crucifix taken off an apartment wall.

Police say Ovalle broke into the woman's apartment in December and jumped out of a closet when she came home, trying to stab and strangle her.

Authorities say the woman bought herself time by telling Ovalle to turn on a DVD in another room so their two girls wouldn't see the assault.

A police officer burst in and shot Ovalle twice. Authorities say one bullet passed through his chest and hit the woman's arm. Sentencing is set for Oct 6.