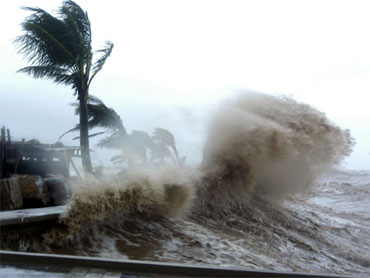 A new tropical storm brewing in the South China Sea forced Vietnam to suspend the search Monday for 17 fishermen missing from another storm that struck over the weekend, disaster officials said.

Conson had earlier struck the Philippines at typhoon strength, leaving 68 people dead and another 84 remain missing. It was downgraded to a tropical storm before it made landfall in Vietnam. More than 600 homes were damaged and 43 boats destroyed in Vietnam, authorities said.

Meteorologists said Monday a tropical depression with sustained wind speeds of up to 38 miles per hour has now formed and could gather strength to become a tropical storm overnight.

Disaster official Phan Van On from Quang Ngai province said the search-and-rescue operations to locate the missing fishermen have been suspended.

In the northern province of Quang Ninh, authorities found a man who was earlier reported missing after his small boat sank in the picturesque tourist attraction of Ha Long Bay, said disaster official Pham Dinh Hoa.

Authorities also recovered the body of a 1-year-old who died of an illness just before the storm hit. The body was swept away from the mother when the small boat she was using to ferry the body for burial capsized, he said.

Authorities also found the body of a female Vietnamese tourist swept away by big waves while swimming, said disaster official Nguyen Thi Bich Lien, in northern Thanh Hoa province. The woman was not counted as a victim because she drowned before the storm came.