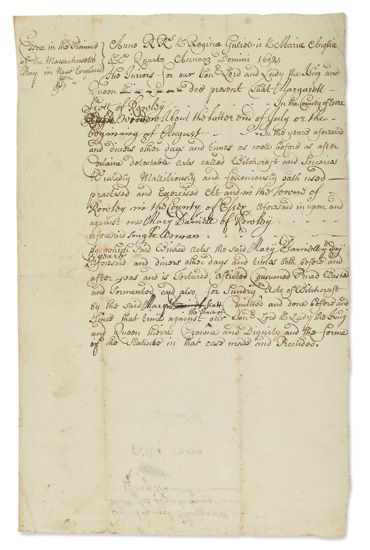 (CBS/AP) SALEM, Mass - A document from the Salem witch trials was sold at auction for $31,200 when it hit the auction block on Thursday.

The original court indictment of Margaret Scott, a widow from Rowley, Massachusetts in her 70s, and one of the last people hanged during the 1692 hysteria in colonial Massachusetts.

It was part of a private collection of historical documents being sold at Swann Auction Galleries in New York City.

Richard Trask, the Danvers town archivist and a leading expert on the trials, told The Salem News "Scott was found guilty at her trial and she was executed along with seven others in September of 1692."

Trask said it is just the third time in a 50-year career he can recall a witchcraft document being sold.

"It's not that unusual to see a document from this early, but it's almost impossible to get one on the auction market from the witch trials," Rick Stattler of Swann Auction Galleries told The Salem News. "They just don't turn up."

Nineteen people were hanged and one person was crushed to death during the course of the trials. Other accused witches died in prison.