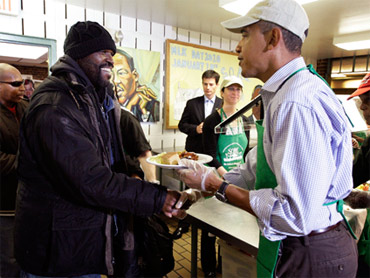 Volunteering in America is on the rise.

Americans spent 100 million more hours helping their communities last year, a new federal report says, and the number of people getting involved went up by 1.6 million to 63.4 million.

It's the biggest increase in volunteers in a single year since 2003, according to a report being released Tuesday by the government-run Corporation for National and Community Service. The agency oversees national service programs including AmeriCorps.

The rise in volunteers comes as the nation struggles to regain its economic footing amid high unemployment.

Patrick Corvington, who leads the government's national service agency, said people in these affected areas are still helping a neighbor in need or cleaning up a nearby park. He said the report reflects those serving through more formal organizations and nonprofits, and doesn't capture those giving in other ways.

Women largely contributed to the jump in volunteers. In 2009, 36.7 million women volunteered, up 1.2 million from 2008. More blacks also gave their time.

Americans overall set aside 8.1 billion hours to lend a hand, with the typical volunteer donating about 52 hours for the year.

"People are turning toward problems, rather than away from them," Corvington said. "People want to be part of the solution. They want to make a difference."

Raising money or selling items was the top volunteer activity, followed by collecting and distributing food. Others spent time providing transportation or labor, and tutoring or teaching.

Since taking office in January 2009, President Barack Obama has made it a priority to bolster national service programs. Both he and first lady Michelle Obama have spoken on the topic, challenging others to donate their time to causes in their neighborhoods as a way to help where government alone cannot. The Obamas have volunteered for a number projects, and the president started "United We Serve," a nationwide service initiative to get people involved in volunteering.

The corporation prepared the report, called "Volunteering in America," in partnership with the Bureau of Labor Statistics and the Census Bureau.