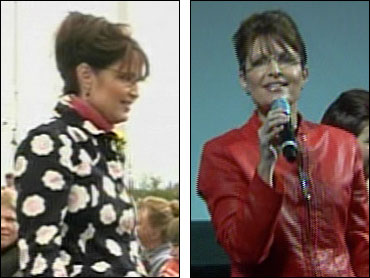 Since she's been on the campaign trail, Sarah Palin has received a lot of attention over her wardrobe, her hair, even her glasses.

Now, Politico.com is reporting the Republican National Committee has spent more than $150,000 on clothes and accessories for Palin and her family.

Politico says the expenditures began early last month, soon after Palin was picked by John McCain to be his running mate.

Spending records filed with the Federal Election Commission and obtained by Politico show the RNC paid for "campaign accessories" from upscale department stores such as Saks Fifth Avenue, where nearly $50,000 was spent, Neiman Marcus, $75,000, and $4,700 for hair and makeup.

"The problem with this for the campaign," explains Politico Chief Political Writer Mike Allen, "is it's the kind of thing that can stick in people's minds. At a time when they're cutting back on their own spending, they see a candidate looking extravagant."

And that, observes Oliver, could pose a political risk.

In 2000, Al Gore was criticized for changing his look by wearing clothes with earth tones. Two years ago, Hillary Clinton got some attention for two hair styling sessions that cost $2,500. And of course there were those $400 haircuts John Edwards got.

"This would," Allen says, "make the John Edwards haircut look like a bargain at the same time she's (Palin's) trying to connect with Joe and Jane the Plumber."

The McCain campaign released a statement late Tuesday night saying, "With all the important issues facing the country right now, it's remarkable that we're spending time talking about pantsuits and blouses. It was always the intent that the clothing go to a charitable purpose after the campaign."

Politico told CBS News it hasn't been able to identify any similar expenditures on the Democratic side.