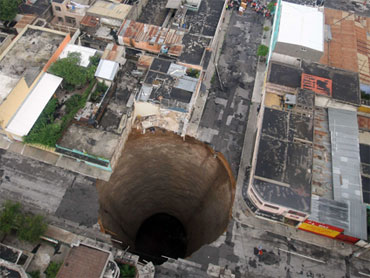 Flooding and landslides from the season's first tropical storm have killed at least 150 people and made thousands homeless in Central America, officials said.

Dozens of people were missing and emergency crews struggled to reach isolated communities cut off by washed-out roads and collapsed bridges caused by Tropical Storm Agatha.

The sun emerged Monday in hardest-hit Guatemala, where officials reported 123 dead and at least 90 missing. In the department of Chimaltenango - a province west of Guatemala City - landslides buried dozens of rural Indian communities and killed at least 60 people, Gov. Erick de Leon said.

"The department has collapsed," de Leon said. "There are a lot of dead people. The roads are blocked. The shelters are overflowing. We need water, food, clothes, blankets - but above all, money."

In the tiny village of Parajbei, a slide smothered three homes and killed 11 people.

A photograph reveals that a sinkhole in northern Guatemala City engulfed a three-story building. There are no confirmed deaths from the incident, but stunning aerial photos showed a massive bottomless hole may have devastated more than just one large building.

"It was raining really hard and there was a huge noise," said Vicente Azcaj, 56, who ran outside and saw that a hill had crumbled. "Now everyone is afraid that the same will happen to their homes."

Volunteers from nearby villages worked nonstop since Sunday to recover the bodies in Parajbei, and on Monday they found the last two: brothers, 4 and 8 years old, who were buried under tons of dirt, rocks and trees.

As a thank-you, rescuers got a plate of rice and beans from the mayor of nearby Santa Apolonia.

"It's a small thing, but it comes from the heart," Tulio Nunez told them through a translator.

Nunez said he worried about the well-being of survivors in the area because landslides blocked roads and broke water pipes.

"They don't have anything to drink," he said.

In all some 110,000 people were evacuated in Guatemala.

Thousands more fled their homes in neighboring Honduras, where the death toll rose to 17 while meteorologists predicted three more days of rain.
Two dams near the capital of Tegucigalpa overflowed into a nearby river, and officials warned people to stay away from swollen waterways.

In El Salvador, 11,000 people were evacuated. The death toll rose to 10 and two others were missing, President Mauricio Funes said Monday night.

About 95 percent of the country's roads were affected by landslides, but most remained open, Transportation Minister Gerson Martinez said. He said 179 bridges had been wrecked.

The Lempa River, which flows to the Pacific, topped its banks and flooded at least 20 villages, affecting some 6,000 people, said Jorge Melendez, director of the Civil Protection Agency.

Officials warned that the Acelhuate River, which cuts through San Salvador, was running at dangerously high levels and threatened to spill over into the capital's streets.

Melendez said classes would be suspended Tuesday in all primary and secondary schools and public and private universities across El Salvador.
Agatha made landfall near the Guatemala-Mexico border Saturday as a tropical storm with winds up to 45 mph. It dissipated the following day over the mountains of western Guatemala.

The rising death toll is reminding nervous residents of Hurricane Mitch, which hovered over Central America for days in 1998, causing flooding and mudslides that killed nearly 11,000 people and left more than 8,000 missing and unaccounted for.

Rescue efforts in Guatemala have been complicated by a volcanic eruption Thursday near the capital that blanketed parts of the area with ash.