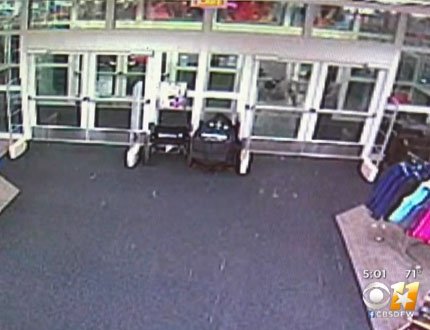 LEWISVILLE , Texas -- A few North Texas department stores have become a target for jewelry thieves, and the criminals keep coming back despite being caught on camera, reports CBS DFW.

The thieves are hitting Kohl's department stores in the middle of the night, reports the station.

Store surveillance video caught them throwing a rock through the door of a Lewisville store, grabbing store bags and smashing jewelry counters.

They took $140,000 worth watches, gold and necklaces and then rolled it out on a store wheelchair.

Police suspect they had a car parked nearby as a getaway.

Kohl's stores in Dallas and Carrollton have also lost about $100,000 in similar burglaries. There was also an attempted burglary in Irving.

Detectives suspect several people are involved but believe the cases are all related. The Lewisville Police Department is asking for the public's help by distributing the surveillance video and pictures of the suspects.