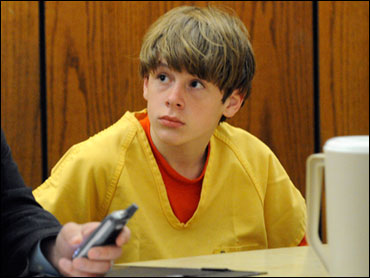 (AP Photo/Idaho Press-Tribune)
Zachary Neagle during his May 20, 2009 bond hearing.

CALDWELL, Idaho (CBS/AP) The 14-year-old boy who sat in an Idaho court yesterday looked sad, alone and bewildered. A grand jury had just indicted Zachary Neagle for an unspeakable crime, allegedly murdering his father while he slept. The method: a shotgun blast to the head. He will be tried as an adult.

But his incarceration and pending trial has sparked a grassroots movement who believe the boy must have been molested by his father. Inside the court Neagle stared despondently in chains and orange jail suit. Outside, his supporters held signs and a sense of indignation.

"He had more chains on him than Michael Vick's dogs," Teresa Bennet, who organized the rally, told the Idaho Statesman. "It just broke my heart, and I had to do something. A lot of people want to do something."

Canyon County Prosecutor John Bujak told the Statesman that his office received around 150 calls on the case. "At least 85 percent of the messages were to the tune of, 'You monster, don't charge Zachary as an adult. He's obviously a victim of sex abuse,'" he said.

One family member told police he suspected Neagle may have been abused by his father. For protestors and a now global online petition, that suspicion has stuck.

But so far Neagle's mother, Cindy Neagle, is both supporting her son and deceased husband, who she does not believe abused her son.