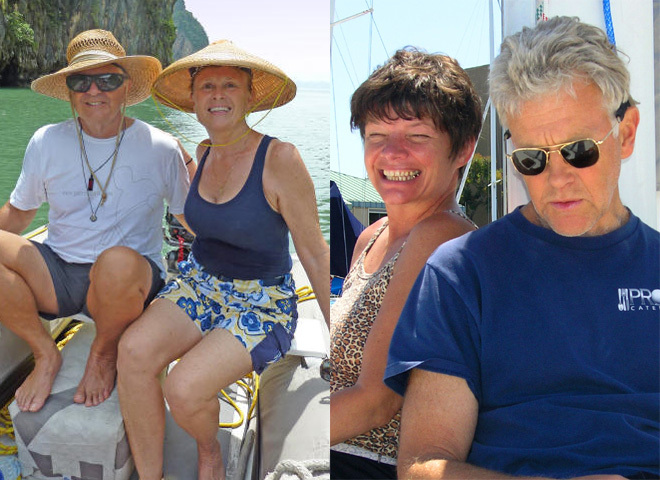 NORFOLK, Virginia - A federal grand jury has indicted 13 suspected pirates from Somalia and one from Yemen in the February hijacking of a yacht that left four Americans dead, the U.S. Justice Department said Thursday.

The men face piracy, kidnapping and firearms charges stemming from their efforts to hold the Americans for ransom, according to the indictment.

The indictments do not specifically charge the suspects with murder but say "...at least three of the defendants on board the Quest intentionally shot and killed the United States citizens," reports CBS News correspondent Bob Orr.

The suspected pirates are scheduled to make an initial court appearance Thursday in Norfolk, which last year was the site of the first successful piracy prosecution in nearly 200 years.

The yacht's owners, Jean and Scott Adam, along with friends Bob Riggle and Phyllis Macay, were shot to death after pirates took them hostage several hundred miles south of Oman.

It was the first time U.S. citizens have been killed in a wave of pirate attacks that have plagued the Gulf of Aden and the Indian Ocean in recent years. The pirates are typically motivated by the potential for millions of dollars in ransom money.

The Adamses, who were retired, had been sailing full-time on their 58-foot (18-meter) yacht, the Quest, delivering Bibles around the world. The indictment says at least three of the indicted men shot and killed the four Americans without provocation.

They died less than a week after a Somali pirate was sentenced to more than 33 years in prison by a New York court for the 2009 hijacking of the Maersk Alabama. That hijacking ended when Navy sharpshooters killed two pirates holding the ship's American captain.

Pirates have increased attacks off the coast of East Africa despite an international flotilla of warships dedicated to protecting vessels and stopping the pirate assaults.

U.S. naval forces were tracking the Americans' captured yacht with unmanned aerial vehicles and four warships, and negotiations were under way when the pirates fired a rocket-propelled grenade.

Then gunfire was heard aboard the yacht. Special forces boarded the vessel and found the Americans had been shot, according to the military. Pirates have blamed the deaths of the American hostages on the U.S. Navy, saying the pirates felt under attack.

The group is the latest to be brought to Norfolk to face charges stemming from attacks on ships off the cost of Africa.

Last April, a federal grand jury indicted 11 in separate attacks on two U.S. Navy ships, the USS Ashland and the USS Nicholas. The Virginia-based ships were part of an international flotilla protecting shipping in the pirate-infested waters off Africa.

In November, five Somali men were convicted on federal piracy charges related to the attack on the USS Nicholas. They are expected to be sentenced this month.

A sixth pleaded guilty. Trials for the remaining five are pending.