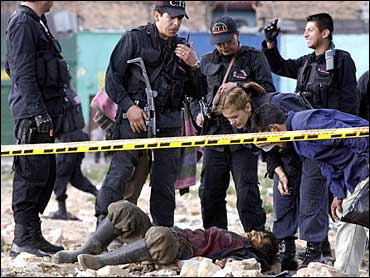 Suspected FARC rebels fired mortar shells on the presidential palace and a nearby slum, killing 14 people just blocks away from where right-winger Alvaro Uribe was being sworn in as president Wednesday pledging to get tough with the Marxist guerrillas.

Despite heavy security -- including 20,000 soldiers and police and a U.S. surveillance plane -- three mortars smashed into the palace, wounding three people and causing superficial damage to the building Uribe will occupy for the next four years.

In an apparent misfire, an equal number of mortars fell on a nearby Bogota shantytown, killing three children and 11 other people -- just as the inauguration of the clean-cut, 50-year-old lawyer began in Congress.

At least 10 bodies could be seen just five blocks from Parliament. The corpses lay in the street and in a heavily damaged house in the poor Cartucho neighborhood.

There were groans and mayhem on the slum streets, as bodies were pulled from a shack. A few streets away, a camouflage-clad policeman, his head bleeding, staggered from the presidential complex, a rifle hanging by his side.

Oblivious to the bombings, Uribe donned Colombia's red, yellow and blue presidential sash and addressed Congress, footsteps away from the palace. In a prepared speech, he promised a firm hand with insurgent forces and said he would — negotiate with them only if they laid down their arms.

"We are offering democracy, so that arms can be replaced by argument," said Uribe. He turned pale when officials took him aside after the ceremony and told him what had happened.

Uribe won a landslide election victory in May promising to curb the bloodshed on an escalating 38-year-old war by boosting security with a big increase in military spending.

Uribe's father was killed by rebels with the Revolutionary Armed Forces of Colombia, or FARC, in the 1980s, and he himself barely survived an April assassination attempt by Latin America's most powerful guerrilla army.

To avert any rebel assassination attempts, Uribe had forgone the traditional outdoor ceremony in Bogota's colonial central plaza and instead took the oath of office in Parliament. Uribe has promised a crackdown on leftist rebels as he takes command of South America's most troubled country.

Army troops quickly sealed off the Cartucho neighborhood after the explosions. There was no immediate official comment.

Troops had patrolled the streets and combat helicopters thundered overhead during the inauguration.

Hours earlier, small bombs exploded in several neighborhoods of the capital, slightly injuring six people and blowing out windows and chunks of sidewalk. No one immediately claimed responsibility for those blasts.

Amid unconfirmed police reports that rebels had planned to crash a plane into Parliament, Bogota's airspace was closed and an American P3 plane staffed with U.S. Customs Service and Colombian air force personnel patrolled overhead.

Hopes were high that Uribe, a 50-year-old former mayor and state governor, can end the war that has sapped the potential of Colombia, a gateway between Central and South America.

He faces a country in economic turmoil. About 64 percent of Colombians live below the poverty line and more than 17 percent of city dwellers can't find jobs.

Uribe, a workaholic and teetotaler, warned in a radio interview Wednesday that he can't perform miracle.

"To the Colombians I say: Expect action every day, but not miraculous results," he said.

Uribe planned to propose a referendum to nearly halve the number of lawmakers and merge the two houses of Parliament. The attack on Colombia's entrenched political class could provoke a pitched battle with the same Congress he needs to support his other reforms.

"President Uribe is going to encounter obstacles in the road, but also a lot of support if he follows through with the necessary reforms," Congressman Antonio Navarro said.

Uribe said the reforms will cut back on government waste and allow more money to be diverted to fighting the war. He's also hoping to secure more funding from the United States, which in the past two years gave Colombia $1.7 billion, mostly in military aid.

Uribe's predecessor, Andres Pastrana, tried for three years to negotiate a peace with the Revolutionary Armed Forces of Colombia, or FARC, the nation's largest rebel group. Talks broke down in February without achieving substantial results.

"The guerrillas don't want to talk," said shopkeeper Juan Manuel Martinez. "Uribe is going to take us into war because now we have to fight to save Colombia."