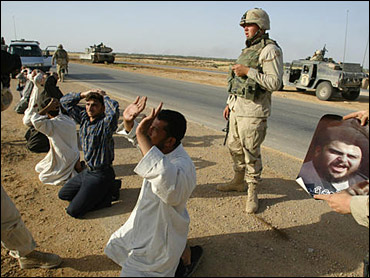 U.S. commanders plan to keep U.S. troops at their current levels in Iraq — about 135,000 — until the end of 2005, Defense Department officials said Tuesday.

The decision acknowledges Iraq is much more unstable and dangerous than U.S. generals had hoped earlier this year, when they planned to cut the number of troops occupying Iraq to about 115,000.

Since then, violence by Sunni and Shiite Muslim extremists has surged, making April the deadliest month for American troops since the March 2003 invasion of Iraq. Several U.S. allies also decided to pull their forces out, most notably Spain, which had more than 2,300 troops in one of the most volatile areas of south-central Iraq.

Defense Secretary Donald H. Rumsfeld on Tuesday ordered about 10,000 active-duty Army soldiers and Marines to prepare to ship out to Iraq in the next few months. They will help replace 20,000 U.S. troops being kept in Iraq for as long as three months past their one-year tours of duty.

Another 10,000 active-duty troops will be called up to fill out the replacement forces, Rumsfeld said.