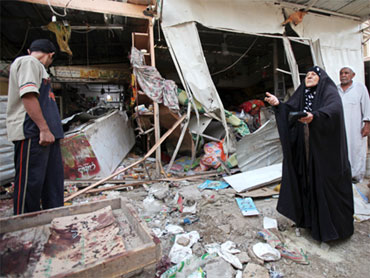 The U.S. military command said Sunday 13 soldiers were killed and more than 20 wounded when their U.S. Chinook helicopter was shot down near Fallujah.

"Currently there are 13 killed in action and more than 20 wounded," the U.S. military said in a statement.

The wounded have all been transferred to medical facilities and authorities are searching for more survivors, it said.

The Chinook helicopter was believed to be carrying dozens of soldiers to their leaves abroad when it was struck by a missile and crashed in corn fields west of Baghdad, witnesses and U.S. officials said. A coalition official had earlier said that at least two soldiers were killed and 20 injured.

Witnesses south of Fallujah, 40 miles west of the capital, said they saw two missiles fired at the helicopter, which came down near the village of Hasi, six miles to the south. Fallujah is a center of Sunni Muslim resistance to the U.S. occupation.

"The Chinook was shot down by an unknown weapon," a U.S. military spokesman in Baghdad said on condition of anonymity.

American military officials have repeatedly warned that hundreds of shoulder-fired surface-to-air missiles remain unaccounted for in Iraq since the collapse of Saddam Hussein's regime in April. Insurgents have fired on U.S. aircraft before, but this was the first known shootdown involving the Baghdad airport.

Across Iraq, it was the third helicopter known to have been brought down since President George W. Bush declared an end to major combat on May 1.

The helicopter was part of a formation of two Chinooks carrying more than 50 passengers to the U.S. base at the former Saddam International Airport, renamed Baghdad International.

"Our initial report is that they were being transported to BIA for R&R flights," that is, rest and recreation leaves abroad, a U.S. command spokeswoman in Baghdad said. She said at least some were coming from Camp Ridgeway, believed to be an 82nd Airborne Division base in western Iraq.

Witnesses said the second copter hovered over the down craft for some minutes and then set down, apparently to try to help extinguish a fire, but the downed copter was destroyed.

At least a half-dozen Black Hawk helicopters later hovered over the area, and dozens of soldiers swarmed over the site. Injured were still being evacuated at least two hours later.

Local villagers displayed blackened pieces of wreckage to arriving reporters, and in nearby Fallujah townspeople celebrated on the streets.