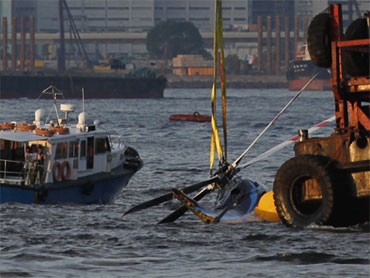 Two pilots and 11 passengers on board a helicopter traveling to the southern Chinese gambling enclave Macau survived an emergency landing into Hong Kong's Victoria Harbor minutes after takeoff on Saturday.

All 13 on board suffered light injuries, with the passengers discharged from the hospital after medical checkups, marine police District Commander Leung Man-kon told reporters.

The pilots executed an emergency landing after noticing a mechanical problem that created a loud noise minutes into the journey, said Leung Yu-keung, acting head of the Civil Aviation Department.

They were able to avoid a plunge into the harbor because the pilots deployed inflatable buoys before the aircraft hit the water, Leung said.

Hong Kong's Cable TV quoted an unidentified witness as saying the helicopter fell onto the harbor at a trajectory.

Hong Kong's radio RTHK reported on its website that operator Sky Shuttle has suspended services to inspect its fleet on the advice of the Civil Aviation Department.

The helicopter rides are a pricey alternative to the commonly used high-speed ferry service to Macau, with each one-way flight costing 2,600 Hong Kong dollars ($330) per person.