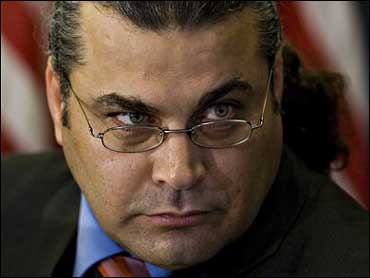 The unidentified agents are being sought on suspicion of the wrongful imprisonment of Khaled El-Masri and causing him serious bodily harm, Munich prosecutor Christian Schmidt-Sommerfeld said. He said the warrants were issued in the last few days.

El-Masri, a German citizen of Lebanese descent, says he was abducted in December 2003 at the Serbian-Macedonian border and flown by the CIA to a detention center in Kabul, Afghanistan, where he was abused.

He says he was released in Albania in May 2004 after the CIA discovered they had the wrong person.

CBS News has learned the list of persons charged by Germany comes from flight manifests obtained in Spain, where the planes used in rendition flights, such as the Boeing 737 that ferried El-Masri, frequently stopped en route to and from the U.S., according to flight logs.

Among the 13 persons charged is a Virginia-based pilot known by the alias James Fairing and a retired U.S. Army captain named Lyle Edgard Lumsden III, whose last address is in the Washington, D.C. area.

"I just don't anything about this," Lumsden's sister, Carolyn, told CBS News. She could not say where her brother is at the present time or who he is working for.

Lumsden, 51, retired in 1992 from active duty, primarily having served as a physician's assistant, according to U.S. Army records. In the 1990's, Lumsden was dispatched from Fort Bragg as a civil affairs expert to Haiti and Bosnia.

"This is a nightmare," his sister said. "I just find this thing very Alice-in-Wonderland-like."

"The reaction of Khaled is that he is very satisfied," Gnjidic told CBS News. "This is only one step in a long way to go."

Gnjidic said he is waiting for the report of a German parliamentary inquiry. "They don't accept what happened to their citizen – the detainment and torture," he said.

El-Masri, the attorney said, still wants an apology from the American government.

Rights campaigners have seized on El-Masri's story to press the United States to stop flying terrorism suspects to countries other than the U.S. where they could face abuse — a practice known as "extraordinary rendition." Italy has issued arrest warrants for alleged CIA agents in a separate case.

U.S. Secretary of State Condoleezza Rice and other U.S. officials have declined to address the case. However, German Chancellor Angela Merkel has said the United States has acknowledged making a mistake with El-Masri.

Germany's NDR television released a list of the names of the suspected agents — 11 men and 2 women — it said its reporters had obtained. It said three had been contacted by its reporters and had refused comment.

Though the prosecutors' office refused to confirm the names, Schmidt-Sommerfeld said "the personal details contained in the arrest warrants are, according to our current knowledge, aliases of CIA agents."

"Further investigation will, among other things, concentrate on trying to determine the clear identities of the suspects," he said in a statement.

Gnjidic said the issuance of the arrest warrants were "a very important step in the rehabilitation of El-Masri."

"It shows us that we were right in putting our trust in the German authorities and the German prosecutors," he said at a news conference.

Prosecutors were led to the suspects after receiving a list in December 2005 of possible people involved in the kidnapping compiled by a Spanish journalist from sources within Spain's Civil Guard, a paramilitary police unit that answers to the Interior Ministry, Schmidt-Sommerfeld said.

With help from Spanish authorities, they were then able to pursue an investigation against "concrete persons," Schmidt-Sommerfeld said.

Tips were also received from others, including the Milan prosecutor's office and Dick Marty, a Swiss senator who led an inquiry into CIA renditions on behalf of the Council of Europe. Schmidt-Sommerfeld did not elaborate on what the tips were.

The CIA agents are suspected to have flown in January 2004 aboard a Boeing 737 from the Spanish island of Palma de Mallorca to pick up El-Masri after he had been detained by Macedonian authorities, Munich prosecutor August Stern said.

ARD public television has reported that investigators worked from passport photocopies made by a hotel where the suspects stayed, but Stern said he could not confirm that or other details. The report last year gave what it said were the cover names of three men who were pilots and lived in the U.S. state of North Carolina.

In October, Munich prosecutors said that, based on the list, they were seeking to ban several CIA agents suspected of kidnapping El-Masri from entering German territory. They did not elaborate.

In a separate case, Italian authorities are seeking the arrest of 26 Americans, all but one believed to be CIA agents, in connection with the 2003 kidnapping in Milan of Egyptian cleric and terror suspect Osama Moustafa Hassan Nasr.

The El-Masri case has been a sore point in otherwise good German-U.S. relations.

El-Masri has asked a federal appeals court in Richmond, Virginia, to reinstate a lawsuit he filed against the CIA. A judge dismissed the lawsuit in May, ruling that a trial could harm national security by revealing details about CIA activities.