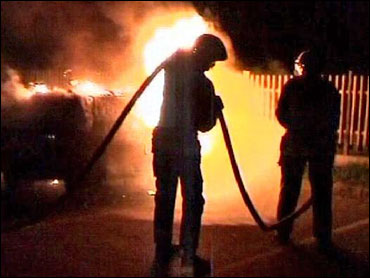 Youths torched cars, set garbage bins alight and threw stones at police in a fifth night of rioting in a Paris suburb, and set two primary school classrooms on fire as rioting spread to two other suburban towns, police and an official said Tuesday.

Police said that 19 people were detained in the late Monday and early Tuesday rioting in Clichy-sous-Bois and three other suburbs and 13 of them jailed. A total of 21 cars — two of them police cars — were burned, police said.

The mayor of Sevran said youths set two rooms of a primary school on fire, along with several cars. Police said three officers were slightly injured in Sevran.

"These acts have a direct link to the events in Clichy-sous-Bois," Sevran Mayor Stephane Gatignon said in a statement.

The troubles started Thursday night in Clichy-sous-Bois, northeast of Paris, following the accidental electrocution deaths of two teenagers who hid in a power substation to escape police whom they thought were chasing them. Officials have said police were not pursuing the boys, aged 15 and 17, at all.

Besides Clichy-sous-Bois and Sevran, troubles also erupted in Aulnay-sous-bois and Bondy, police said. All communities are in the Seine-Saint-Denis region, considered a "sensitive" area of immigration and modest incomes.

Interior Minister Nicolas Sarkozy on Monday ordered a permanent increase in police and undercover agents to identify troublemakers in difficult neighborhoods. However, the law-and-order minister's tough talk drew growing criticism Tuesday — even from within his own government.

Sarkozy recently referred to troublemakers in the suburbs as "scum" or "riffraff" and in the past vowed to "clean out" the suburbs.

He told the paper that he "contests this method of becoming submerged by imprecise, warlike semantics."

While re-establishing order demands firmness, "it is in fighting the discrimination that victimizes youths that order is re-established, the order of equality," said Begag, who was raised in a low-income suburb of Lyon.

The president of SOS-Racism, an anti-racism group, called Tuesday for a "massive investment plan" to cure suburban ills.

"The police response alone ... are not at all adequate to the problem in question," Dominique Sopo said on France-Info radio, calling for a "real policy of breaking the ghettos." The money must go not only to building, but also to caring for the people via local associations, he said.

Sarkozy says violence in the suburbs is a daily fact of life, with dozens of cars torched each night and underground economies of crime.

In incidents apparently unrelated to the riots near Paris, youths set fire to an empty building and trash cans and stoned fire trucks in several nights of unrest in Sedan, northeastern France, authorities there said Tuesday. Officials said the youths were protesting the imprisonment of one of their peers on drug charges and for resisting arrest.