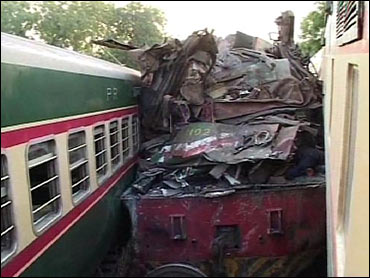 Three trains crashed in a deadly chain-reaction after a train driver misread a signal in southern Pakistan early Wednesday, killing at least 127 people and injuring hundreds more in the country's worst crash in more than a decade, police and railway officials said.

The nighttime accident jolted passengers awake to a horrifying smash-up that left metal, glass and body parts strewn across a remote railway station near Ghotki. Rescuers frantically cut through twisted metal to reach survivors, as ambulances and buses ferried the injured to nearby hospitals.

"We woke up to a huge bang," said Suraya, a 22-year-old woman who like many Pakistanis goes by just one name. "I fell down to the floor. Then I heard the screams."

At the scene, villagers and surviving passengers — some splattered with blood — peered into the wreckage looking for victims. Massive train wheels, springs and other train parts ripped from carriages were scattered between the tracks.

Cars that had jumped the tracks lay on their side. Others were crumpled into heaps of twisted metal and had crushed motorcycles, cooking pots and other items near the crash site.

Bodies of victims were wrapped in white cloth and piled together.

"It is a very gruesome situation," local police chief Agha Mohammed Tahir said. He said 127 people had died, including three who succumbed to their injuries at a hospital in Ghotki.

Awan blamed the driver of the night-coach Karachi Express for misreading a signal and rear-ending another passenger train.

"The crash occurred because of misreading of a signal by the driver of Karachi Express and it rammed the Quetta Express, which was not moving," Awan told AP.

President Gen. Pervez Musharraf offered his condolences to the injured and the families of those killed, and promised that anyone guilty of negligence would be prosecuted. He said at least 135 people were seriously injured.

"It is clear that this was not sabotage. We will immediately start an inquiry and if there was any carelessness involved, it should be punished," he told state-run Pakistan Television.

The accident occurred at about 4 a.m. near Ghotki, some 370 miles northeast of Karachi, in remote Sindh province. The initial crash derailed at least three carriages onto another track where they were struck by the third train, causing further derailment, said Abdul Aziz, a senior controller at Pakistan Railways.

In all, some 13 cars derailed.

Chaudhry Nazir Ahmed, a railroad official in Ghotki, said about a thousand people were believed to be traveling in the three trains.

Naveed Zubairi, a cameraman with Associated Press Television News who happened to be traveling on the Karachi Express with his family, described a scene of confusion following the crash.

"My children were crying in the darkness. Then I made some light with my mobile phone to look around. There were injured people nearby," he said. "I went out of the carriage. Four carriages of another train on an adjacent track had fallen on one side and people in them were shouting for help. They were breaking windows to get out."

Some 30 bodies and over 100 injured people were taken to the Civil Hospital in the nearby town of Sukkur, said Iqbal Ahmed, a doctor there. He said at least 12 people were in critical condition, some with lost limbs or massive head injuries.

Rescuers had to cut through metal to get to some of the injured, said Tahir, the local police chief. "They are being pulled out every minute," he said.

The impact pushed three carriages onto an adjacent track, and they in turn were hit by the Tezgam Express, heading from Karachi north to Rawalpindi.

Pakistan's railways are antiquated, and there have been many accidents in recent years — including several at Ghotki — blamed often on faulty equipment or human error.

A train carrying 800 passengers from Karachi to Lahore slammed into a parked freight train at Ghotki on June 8, 1991, killing more than 100 people. Authorities blamed staff negligence for that accident.

On Sept. 20, 2003, a train plowed into a packed bus in central Pakistan, killing at least 27 people and injuring six others.