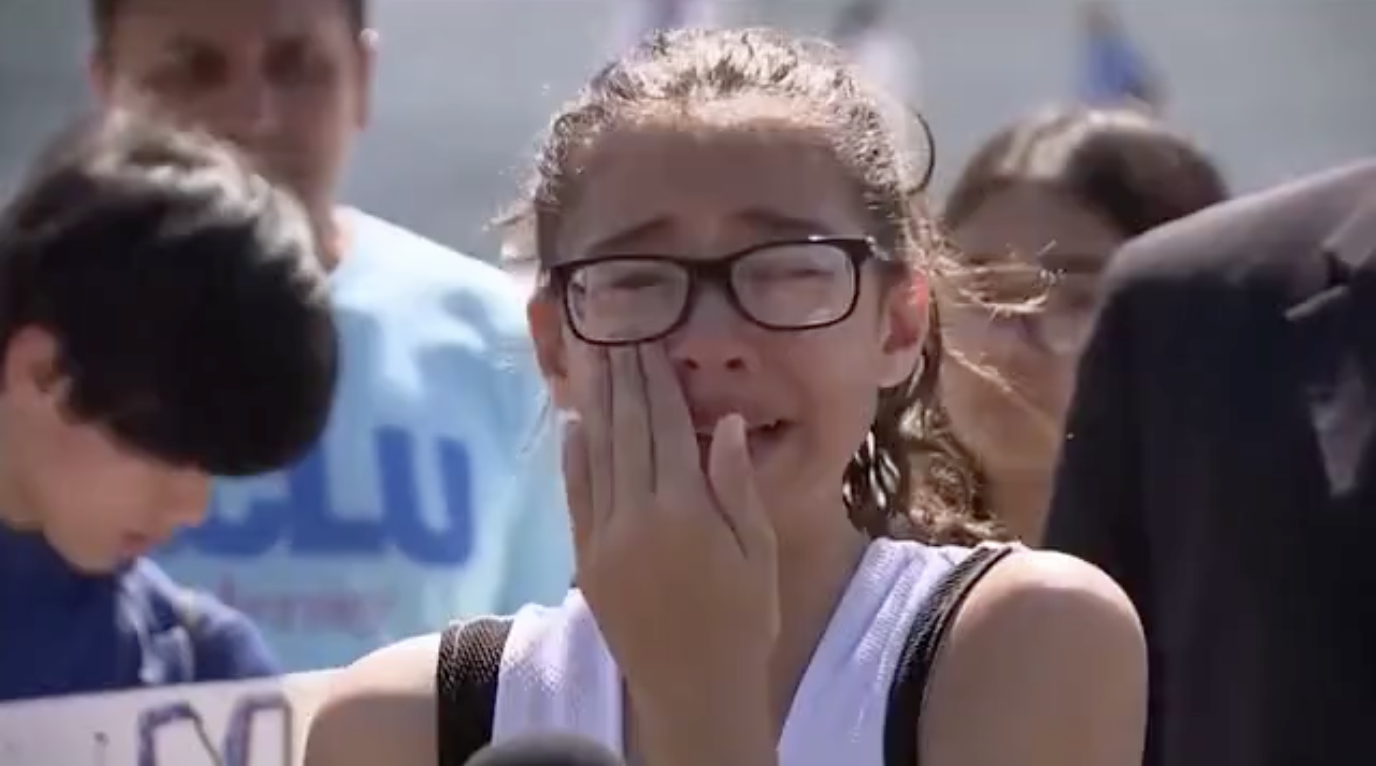 The 12-year-old daughter of an immigrant who was detained by ICE began sobbing while she spoke at a rally in Washington, D.C. on Tuesday. Michelle Edralin described what life is like after her father's detention: "It's horrible."

Edralin attended the rally with other six children of immigrants who have been detained in New Jersey. Edralin, who is from Highland Park, New Jersey, was there with her sister and mother to support her father, Cloyd Edralin, who immigrated from the Philippines and had a green card allowing him to live and work in the U.S.

The group's trip to Washington was led by immigrants' rights activist Rev. Seth Kaper-Dale of Reformed Church of Highland Park. They held a press conference on the steps of the Supreme Court during which Edralin and the others spoke.

"He appreciated the little things, even if it didn't matter that much," Edralin said of her father. She said she didn't get to see her father much due to his work schedule. "The day I was gonna be able to see him when he got home from work, after I hadn't seen him for two days, he got picked up by ICE and I couldn't see him at all," she said through tears.

"I can't even enjoy the times when I see him at the detention center because there are certain restrictions," Edralin said. "I want to sit on my father's lap to be able to hug him and kiss him how I would at home. But I can't."

Edralin took several pauses to catch her breath through her sobs. "Even he has his good days there and he's very humorous, making jokes, I can't enjoy it because I just know that he's not OK in the detention center where he is," she said. "When I first saw him, he couldn't take it. The food they are giving him is horrible. The fact that I can only see him an hour when I am able to see him ... It's so horrible!"

Cloyd Edralin has lived legally in the United States for three decades, Rev. Kaper-Dale tells CBS News. Edralin is married to an American citizen, Brandi Davison-Edralin, and they have four children. As Edralin was leaving his house to go to work earlier this month, he was stopped by ICE officers and detained. The 47-year-old green card holder was told he was being held over an 11-year-old firearms conviction.

"He's a green card holder, why was he picked up for something he did 11 years ago and was convicted for? He did his time!" his daughter shouted at the end of her emotional speech in the capital.

Michelle Edralin told CBS News that what inspired her to speak on Tuesday was her anger toward the situation. "I wanted everyone to know this is happening and something needs to happen about it," the sixth-grader said. She said when she heard about ICE detaining immigrants, she thought her dad was safe because he had a green card. Then, as she was getting ready for school one morning, her dad was gone.

Just after Edralin's speech on the steps of the Supreme Court on Tuesday, it was announced that the justices had voted to uphold President Trump's travel ban. The 5-4 decision is the court's first substantive ruling on a Trump administration policy and allows tight restrictions on travelers from seven countries.

This comes during at time of widespread turmoil over another Trump administration immigration policy. The administration stopped separating immigrant children from their parents at the U.S.-Mexico border amid public outcry last week, but maintains that a "zero tolerance" policy remains in place. Federal agencies are now tasked with reuniting 2,000 separated minors with their parents.