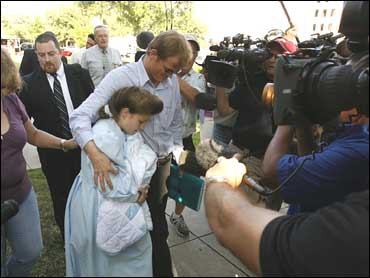 A dozen children removed from the polygamist Yearning for Zion Ranch have been reunited with their parents while the Texas Supreme Court decides their fate - and that of more than four hundred children still in state custody.

The lawyer for a couple whose three children were among the hundreds removed last month by Texas authorities says the family is celebrating.

The attorney says a "little boy just grabbed for his daddy" when he and his two sisters were reunited with their parents.

Among those released was newborn Richard Daniel Jessop, born while his 22-year-old mother Louisa was in state custody. Friday was only the second time Dan Jessop had been allowed to see his 12-day-old son.

"It's tough being separated," Jessop said.

"We're just so grateful that there's some good people who want to do right and get these children back with their parents," said grandmother Gloria Jessop.

The children are spread out at group shelters across the state, reports CBS News correspondent Hari Sreenivasan.

The agency has agreed to allow the parents to live with their children in the San Antonio area under state supervision.

The three families are not allowed to return to the Yearning For Zion ranch, where they lived before the raid.

Among other concerns, the child protection agency was worried that some underage girls were compelled to marry older men in the sect.

On Friday an appeals court ruled the state had no right to keep the children, and that the department had failed to prove that a system of belief which allows underage girls to marry puts other children in danger from physical or sexual abuse.

"To take on every child in the community as they've done is a mistake," said sect family spokesman Rod Parker. "It was more harmful to the children than anything that could conceivably happen to them in 20 30 40 years"

But in a custody hearing Friday, the state presented what it said were wedding pictures of a 12-year-old girl kissing Warren Jeffs, the jailed leader of a related polygamy group, the FLDS. The pictures were an apparent effort to show evidence that the community supports underage marriages.

But the Jessop family in San Angelo sees no connection to their two-week-old son.

"You see far worse, immoral, disgusting, gross things than a girl kissing a man in the streets of your own community," Jessop said outside the courthouse.