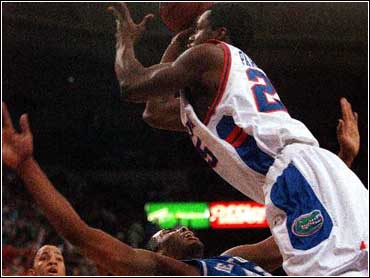 The Gators showed that Tuesday night, as they validated their spot among the nation's elite with a wire-to-wire 90-73 victory against a team it seemed they expected to beat.

Sophomore Mike Miller led the effort with 11 points and a career-high 18 rebounds. The victory put Florida (18-4, 7-2 Southeastern Conference) into a three-way tie for first in the SEC East with Kentucky (17-6, 7-2) and No. 8 Tennessee.

And instead of celebrating the victory over one of the country's most storied programs, coach Billy Donovan seemed content to lump it in with the rest of them in this, a season of increasing expectations.

"Sure, it's great to beat a team with their tradition and their championships," said Donovan, a former assistant at Kentucky. "But we have to keep this in perspective. I hope these guys understand that this is one game. We still have to go back and play them in Lexington."

The Wildcats came in as arguably the hottest team in the nation, having gone 13-1 since splitting their first eight games and bringing up questions as to whether their dynasty was in decline.

Certainly it isn't, although the Gators made it look that way at times before a frenzied crowd of 11,818, many of whom waited outside overnight to get seats at the O'Connell Center.

Full-court trapping the Wildcats into a state of frustration, the Gators took a 34-17 lead with seven minutes left in the first half and spent the rest of the game holding off Kentucky rallies.

Florida got the lead up to 19 points early in the second half. Kentucky got the deficit down to 76-66 with three minutes remaining but committed a turnover when it had the ball with a cance to trim it to eight.

"I thought tonight we just got beaten pretty soundly by a very good team," Wildcats coach Tubby Smith said. "We didn't seem to be kicking on all cylinders. We seemed to be more interested in talking instead of playing tonight, so these are the results."

Kentucky center Jamaal Magloire was among the biggest talkers.

Drawn into trash talk with most of the Florida team and some of its crowd, Magloire drew his second foul four minutes into the game and his third three minutes into the second half. He played a total of 17 minutes and finished with four points and eight rebounds.

"You're always disappointed when your leading scorer and leading rebounder gets in foul trouble," Smith said. "Those are things you've got to be a little more mature about."

Magloire's poor effort was only part of the problem.

The Wildcats finished 18-of-29 from the free throw line, including a 3-for-9 stretch late in the first half that kept them from capitalizing on a 4-minute scoring drought by Florida.

The loss spoiled a 24-point effort from freshman Keith Bogans and a 17-point game from Desmond Allison.

"A lot of people stepped up tonight," Miller said. "As a unit, we all stepped up. That's going to be a key down the stretch. They can't stop 10 guys stepping up."

The sophomore forward's 18 rebounds were seven more than his previous career-high and gave Florida a 49-36 edge in rebounding.