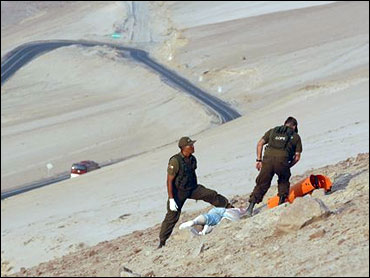 A bus that lacked permission to carry passengers swerved to avoid an approaching truck and tumbled more than 100 yards down a mountainside in northern Chile, killing 12 American tourists, U.S. and Chilean officials said.

The two surviving Americans were in stable condition, according to officials.

"They are conscious, and have been able to talk to doctors," said Juan Carlos Poli, a city hall spokesman in the Pacific port city of Arica. "The main concern is because of their age."

The tourists were returning to Celebrity Cruises' ship Millennium from an excursion to Lauca National Park when the bus plunged off the rugged highway Wednesday near Arica, 1,250 miles north of Santiago, he said.

Poli said the bus, which had a capacity of 16 passengers, "was totally destroyed."

Celebrity Cruises President Dan Hanrahan told reporters in Miami that the victims were part of a B'Nai Brith group. He said the company was flying some relatives of the victims, as well as company officials, to the scene.

He also said that the bus tour was not among those the cruise line offered to its passengers and Chilean officials said the bus was not authorized to carry passengers.

The bus "was not registered with the Transportation Ministry," said Jorge Caceres, head of the ministry's office in the region where the accident occurred.

Pedro Mufeler, regional director of the government tourism agency, told the Associated Press by telephone that the small company, named Andinotours, had filed its request for registration some 15 days ago but it had not been approved yet.

Two Chileans — the driver and the tour guide — were also hospitalized, but Poli said they were in better conditions and the guide was expected to be released Thursday.

He said doctors performed autopsies of six of the victims during the night and the remaining six were expected to be completed shortly, so the bodies can be sent home as soon as possible.

Hanrahan said the victims did not make the reservations for the bus trip through his company, and said Celebrity did not know the bus operator. "We have not worked with this operation before," he said.

The company encourages guests to go on tours vetted by Celebrity because it puts contractors through a rigorous safety review, he said, but added, "What we can't do is tell guests what to do on their own time.

He also said the company was offering to fly the victims' relatives to Chile.

While Hanrahan declined to identify the victims, Rabbi Daniel Cohen of Congregation Agudath Sholom in Stamford, Connecticut, confirmed that Ira and Linda Greenfield of his congregation were among the dead.

Some of the victims also were from Monroe Township in central New Jersey, according to Eileen Marcus, an administrator at The Ponds, an age-restricted development there, though she did not specify which.

All but Ira Greenfield died at the scene, he said.

Noce identified the injured as Harold Ruchelman, 67, and Bernard Diamond, 66.

The Millennium was docked in Arica, and the cruise line said the ship will remain there until further notice. It had been scheduled to leave for Peru early Thursday. The ship was carrying approximately 1,500 guests and 920 crew members.

The accident occurred 25 miles northeast of Arica on the road leading deep into the high Andes Mountains, connecting the coast with the Bolivian capital of La Paz.

The cruise line said it was flying family members of victims to Chile and sending a special assistance team to the ship to help its guests and crew.

"We continue to work with Chilean authorities and the U.S. Consulate in Santiago to assist our injured guests and the family members of those who died in this tragic accident," said Dan Hanrahan, president of Celebrity Cruises.

The ship is on a 14-night South American cruise. It departed Valparaiso, Chile, on March 19 and was scheduled to conclude in Fort Lauderdale, Florida, on April 2.

Celebrity Cruises, which is owned by Miami-based Royal Caribbean Cruises, said the private tour was not affiliated with the cruise line.