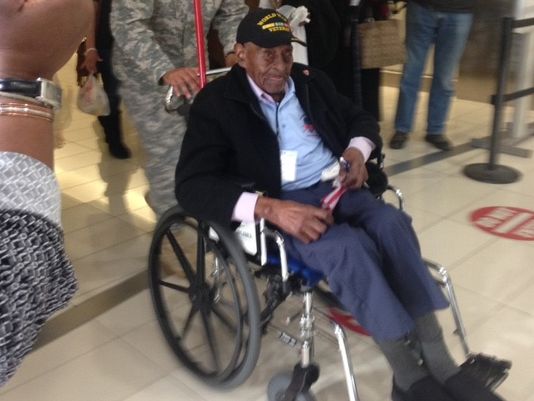 A white limousine brought Frank Levingston to VFW Post 2013 on Saturday for a departure ceremony at which the mayor of Lake Charles, about 130 miles east of Baton Rouge, spoke.

The American Press reports that a crowd of community members and veterans attended.

Then the limo took him to the airport for a flight to Washington.

KPLC-TV reports that highlights include a Pearl Harbor ceremony at the World War II Memorial and, on Tuesday, a White House tour.

With him are his great-niece Shannon Levingston, and his nephew Joseph Levingston.

CBS affiliate WUSA reports that Levingston was an army private and served in Italy during World War II. After receiving an honorable discharge he became a union worker specializing in cement finishing.

Now, he lives in Louisiana. WUSA reports that he's never been to D.C. and said this trip is a dream come true.

He said, "I'm just overwhelmed with joy. I appreciate it."