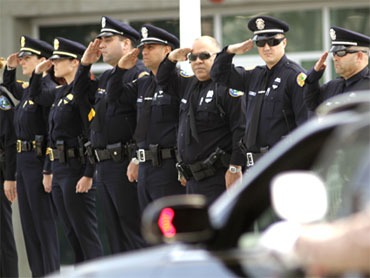 "That's not normal," said Steven Groeninger, a spokesman for the National Law Enforcement Officers Memorial Fund, which tracks police deaths. "It kind of seems like law enforcement, because of their uniform, have a target on their back."

So far in January, 14 officers have been killed in the line of duty. Two of the 11 shot between Sunday and Monday have died.

They were St. Petersburg Police Sgt. Thomas Baitinger and Officer Jeffrey Yaslowitz, gunned down Monday while helping other officers serve a warrant on a man with a long criminal history.

Shortly before 7 a.m., a U.S. marshal, a Pinellas County deputy and an undercover St. Petersburg detective went to a home to arrest Hydra Lacy Jr., 39, on an aggravated battery charge. When they learned he was in the attic with a weapon, they summoned backup.

Officials said Yaslowitz, who was just getting off his night shift, and Baitinger responded.

When it was over, Baitinger and Yaslowitz were dead and Lacy — the brother of Jeff Lacy, former International Boxing Federation super middleweight champion — lay dead as well, either by his own hand or police bullets. A U.S. marshal whose name was not released was shot twice but was doing fine, Chief Deputy U.S. Marshal Tom Figmik said.

Officials said Lacy had a long record, with convictions for armed robbery and sexual battery. He was listed with the state as a sex offender and had failed to register with authorities in December as required.

Deputies had been seeking him since.

"In my mind as a police officer, this crook, this criminal, this murderer, cop-killer, whatever you would like to call him, did a terrible injustice to two of my people today and two of the people that served this community," Police Chief Chuck Harmon said during an afternoon news conference.

The officers' deaths came just four days after two Miami-Dade County detectives were killed by a murder suspect they were trying to arrest. That suspect was killed by another detective.

Those officers were remembered Monday at a funeral where news of the St. Petersburg shootings added to the grief already palpable among the thousands gathered at AmericanAirlines Arena in downtown Miami.

The National Law Enforcement Officers Memorial Fund said the 14 January deaths came after a "devastating spike" in law enforcement deaths last year, when 162 officers were killed in the line of duty, up from 117 in 2009. Of the 162 officers, 61 were shot, an increase of 24 percent from 2009.

"I have never seen anything like it," Memorial Fund Chairman and CEO Craig W. Floyd said in a news release. "The violent events of the past 24 hours in Florida, Michigan, Indiana, Oregon and Washington have been detrimental to America's peace officers, taking the lives of two and injuring several others. We must do everything in our power to stop these senseless and heinous crimes against our law enforcement personnel."

On Sunday, a man opened fire inside a Detroit police precinct, wounding four officers including a commander before he was shot and killed by police. The officers' injuries were not considered life-threatening, Police Chief Ralph Godbee said.

Also on Sunday, two sheriff's deputies in Washington state were shot at a Walmart while responding to a call reporting a suspicious person, according to the memorial group. Police officers in both Indianapolis and Lincoln City, Ore., were critically injured in shootings during traffic stops.