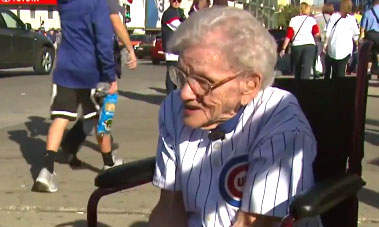 CHICAGO -- One special Cubs fan has been waiting a lifetime to see a postseason victory for her favorite team -- 10o years to be exact, reports CBS Chicago.

Loretta Dolan, who will be 101 in two months, had never been to a playoff game at Wrigley Field-- until now.

On a picture-perfect Monday, she attended her first playoff game and recalled decades and decades of tracking the Cubs. On quite a few occasions, she tells CBS Chicago, she would cry when her team didn't win.

For a half-century, she has tracked every game.

"We use to take our own lunch and pop and we never paid anything," she recalled.

And on Monday she was treated to a dramatic victory while sitting in the second row, as the Cubs beat their arch-rivals, the St. Louis Cardinals, to take a 2-1 lead in the National League Division Series.

Was it all worth the wait?

"Oh, yes," Loretta said on her way out of Wrigley.

As for Tuesday's game Loretta said, "Oh, I hope they win. I hope so."