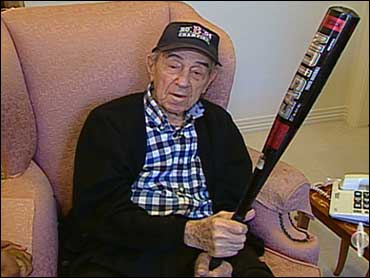 At home in Connecticut, Arthur Giddon begins every day working out.

"Keep your body from becoming stiff and old, and aged," he said.

That attitude may be one of the reasons Giddon celebrated his 100th birthday with a special wish, reports CBS News correspondent Randall Pinkston.

"I said it would be wonderful to be a batboy again," Giddon asked.

"Did you think it was going to happen," Pinkston asked.

But it did. Wearing his custom-make "Big Pappy" Boston Red Sox Jersey - a gift from his daughter - Giddon arrived for batting practice at Fenway Park Saturday. He handled more helmets than bats. A string of Red Sox players made a point to meet him, including the real "Big Papi," slugger David Ortiz.

"You got some hits for me," Ortiz asked Giddon.

The last time Giddon was a batboy was 1923 - a bag of peanuts cost 5 cents, and he was 13, working for the old Boston Braves. Giddon once met Babe Ruth, but his favorite player was Ted Williams.

"Did you ever thing about playing baseball?" Pinkston asked.

"It was more of a dream," Giddon said. "But I don't think I was built for it. I wasn't tall or strong enough."

It was Kennesaw Mountain Landis, the first commissioner of baseball, who steered him to a different career.

That's what Giddon did. Graduating from Harvard Law, then putting his career on hold to serve in the Navy during World War II. But baseball was always in his blood, and the chance to be a part of baseball again, was so very special.